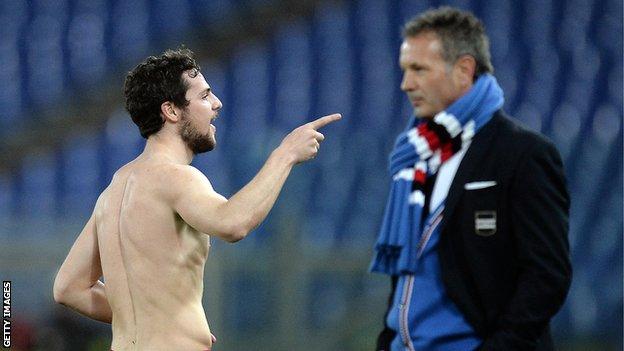 Roma kept their faint Serie A title hopes alive with a comfortable win over 10-man Sampdoria to cut Juventus' lead at the top to nine points.

Mattia Destro opened the scoring, the Italy forward pouncing following a corner at the end of the first half.

Sampdoria's night to forget was complete when Daniele Gastaldello was sent off for two bookable offences.

Is there anyone there?

Parts of Roma's Olympic Stadium were closed during the match after the club was punished when supporters aimed "territorially discriminatory" chants towards rival fans at a recent home game.

Juventus had earlier opened up a 12-point lead with a 3-1 victory over Chievo, but this win keeps Roma in the hunt.

They have one game in hand on the leaders, who still have to travel to face Roma on 11 May.

The title race could all be over by then, but Rudi Garcia's side are not willing to make it easy for the Old Lady.

Indeed they dominated against mid-table Sampdoria, and should have won by a more handsome margin.

Gervinho was denied by a clearance off the line by Gastaldello when the game was goalless, while Pjanic and Destro also went close before the latter broke the deadlock two minutes before the interval.

The 22-year-old was first to react to a corner swung in from the right.

And two goals in four second-half minutes sealed the points.

Bosnia midfielder Pjanic netted the goal of the game from a long-range free-kick before Destro kept his composure to turn and score following good work by Gervinho.