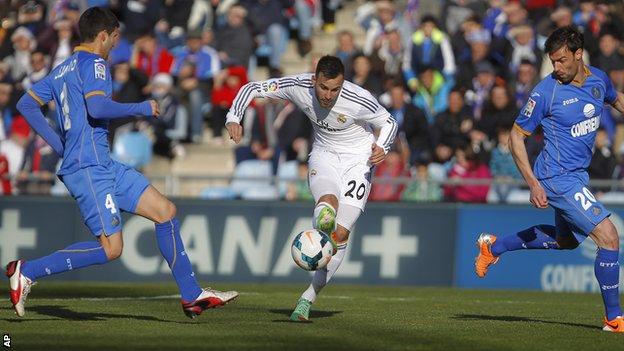 Real Madrid moved back level on points with leaders Barcelona and Atletico Madrid at the top of La Liga with a comfortable 3-0 victory at Getafe.

Carlo Ancelotti's men returned to second, with the top three separated only by goal difference.

Real's new kid on the block

Jese has now scored in his last three La Liga outings, the 20-year-old also netting in the 4-2 win over Villarreal on 8 February and the 1-1 draw at Athletic Bilbao on 2 February.

Real went into the game in fine form, having won 13 of their last 14 games in all competitions and having progressed to the final of the Copa Del Ray - where they will face Barcelona - as the first side in nearly a century to do so without conceding a goal.

Los Blancos are battling for success on three fronts and face German side Schalke in the Champions League last 16 on 26 February.

Real will have to maintain the pressure on Atletico and Barca without Ronaldo for another two league games after his sending off against Athletic Bilbao, but they made light of his absence on Sunday.

Their title rivals had both comfortably won on Saturday to move three points clear but there was rarely any danger of Real not following suit, as they kept an 11th clean sheet from their past 13 matches.

And it took Real just five minutes to take control as Jese scored his eight goal of the season in all competitions, the 20-year-old curling home from an angle after being fed by Bale.

It was almost game over just 11 minutes later as French striker Benzema produced a low finish from close range from Angel Di Maria's cross for his 18th goal of the campaign.

The hosts always looked in control and midway through the second half Modric was allowed too much space just outside the Getafe penalty area to drill a powerful low finish from 20 yards into the net.