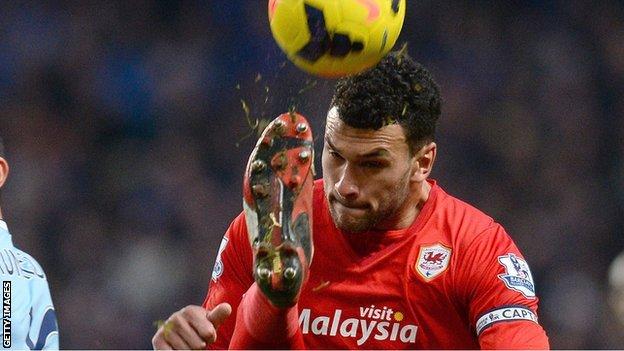 Cardiff are second from bottom after their 3-0 defeat at Swansea.

With only seven points separating 11 teams, defender Caulker believes Cardiff can climb out of trouble.

"We're in a dogfight now, but it's the games against teams like Aston Villa that we'll be looking to get three points from," said Caulker.

"I'd like to make a plea now to our fans to get behind us as they have done all season and really make [Cardiff City Stadium] a difficult place to come.

"Hopefully if we can win seven of our last 13 - all being at home - then we'll remain in the Premier League."

Five of the Bluebirds' seven remaining home games are against clubs in the bottom 11, with the visits of Liverpool and Chelsea the exceptions.

However, the 22-year-old England international, says they have to put an "unacceptable" performance against Swansea behind them quickly.

"We have to hold our hands up - that was unacceptable," admitted Caulker, who spent a season on loan at Swansea before joining Cardiff from Tottenham Hotspur for £8m in 2013.

"We were well beaten in a derby against a team that's in and around us [in the table] and we'd like to perform better but there's no excuses.

Cardiff have lost four out of five Premier League games since Ole Gunnar Solskjaer took over as manager from Malky Mackay at the start of January.

The former Manchester United striker made seven signings during the January transfer window and Caulker thinks it was inevitable that new players and a new manager would take time to bed in.

"Of course it takes a little while for the boys to settle in and a new manager to get across his ideas," he added.

"But I think he's done that now. We're all on the same page, [have the] same understanding and from now on there's most definitely no excuses.

"We want to play attacking football, the manager made that clear when he came in and, bit-by-bit, we're getting used to it and from now on there's no excuses - it's now or never."