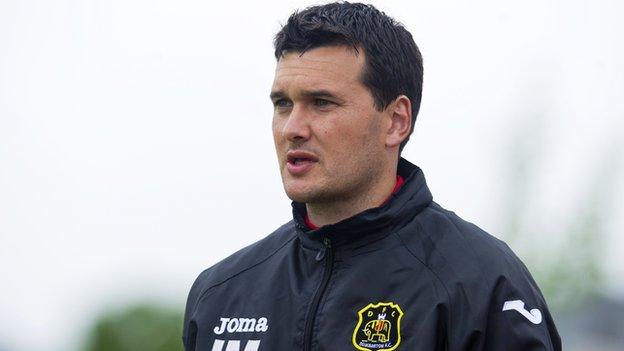 Manager Ian Murray knows Dumbarton's Scottish Cup draw is "as tough as we could possibly get" but he is looking forward to taking on Aberdeen.

"It's a huge game for us, probably the biggest in the last 30 years," Murray told BBC Scotland ahead of next month's quarter-final at Pittodrie.

"I would say Aberdeen were by far the favourites (to win the tournament) then after that Dundee United and Inverness.

"So we want to let the players enjoy the occasion."

Former Hibs and Rangers player Murray is in his first full season in management, having taken over at the part-time Sons in November 2012.

The 32-year-old steered a club that had lost 10 of their 13 league games prior to his arrival to safety last term and now has them sitting fifth in the Championship, just three points off the play-off places.

And now Dumbarton are in the last eight of the Scottish Cup, a competition they won back in 1883.

"I'm delighted for the players and the club to get the chance to play at Pittodrie against a good side, who are looking to win two cups this season," added Murray.

"I'm much happier playing Aberdeen rather than Raith Rovers again or Inverness or Stranraer."

Aberdeen booked their place in the quarter-finals a week after reaching the League Cup final and did it the hard way by winning at trophy holders Celtic.

"I was surprised but not completely shocked," Murray said of Aberdeen's 2-1 triumph in Glasgow.

"Aberdeen have shown over the course of the season how good a side they are.

"If you get Celtic on a day when they click they are a very hard team to beat but confidence is huge in football and Aberdeen were up for the cup after reaching a final the week before."

Dumbarton began their cup run with a 3-1 success at Berwick Rangers and beat league rivals Alloa 1-0 on Saturday thanks to a Colin Nish finish.

It was their third victory at Recreation Park this season and Murray went into the game full of belief.

"We fancied ourselves strongly," he said. "The fact we had beat them 5-1 three weeks beforehand gave us huge confidence.

"We've been in good form since the turn of the year (unbeaten in six games) and it was against another part-time club."

Former Morton captain Mark McLaughlin was recruited over Christmas and adds experience, along with former Hibs and Kilmarnock striker Nish.

"Getting players like Mark McLaughlin and Colin Nish, who have played at the top level, at an age where their quality is still shining through is fantastic for us," enthused Murray.

"When you add them to the players we already had; Mark Gilhaney Brian Prunty, Mitch Megginson - then bring in young Chris Kane on loan - you have a good mix."