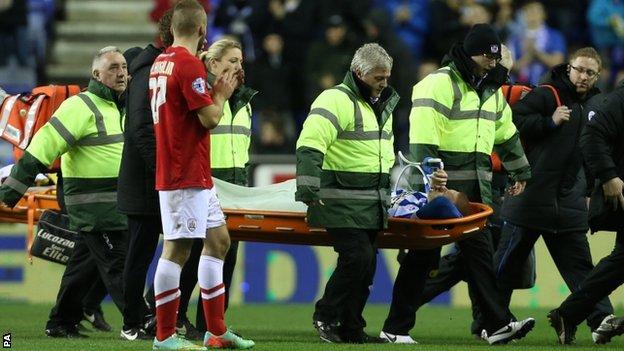 Wigan moved to within four points of the Championship play-off positions with a win over lowly Barnsley, but the match was marred by a bad leg injury to the hosts' Ben Watson.

Watson, who broke his leg 15 months ago, was taken to hospital after a first-half collision with Martin Woods.

And James McClean set up Martyn Waghorn for his first Wigan goal.

Wigan have dropped just two points when leading in the Championship this season, winning 13 out of 14 games.

Latics boss Uwe Rosler said it was too early to tell the extent of Watson's injury, who left on a stretcher with an oxygen mask on in the first half.

The 28-year-old scored the winner in last season's FA Cup final but is out of contract in the summer,

"The sore note is now Ben Watson; we don't know (how serious it is) at the moment, it's too early to say," the German said.

"He's in hospital now. We will find out later on or Wednesday morning. I don't want to speculate, the worst thing is speculation.

Rosler's side are now unbeaten in their last six home league matches and moved to within one place of the top six, with a game in hand on sixth-placed Reading.

The hosts reacted well to a four-minute delay caused by Watson's injury and took the lead when Maynard converted from close range from Beausejour's left-wing cross.

Waghorn's maiden goal for the Latics, from McClean's cross, doubled the lead before the break to leave Barnsley second from bottom in the Championship.

"These games against the so-called underdogs are the most difficult ones.

"The players have been tremendous in their application, they didn't get carried away or lose their focus with Ben's injury - sometimes it's difficult but we kept it.

"The left-hand side combination football - Beausejour, McClean, Chris McCann, Nicky Maynard was excellent, breathtaking. Both goals came from that side, I didn't feel they could cope with that."

"They're a very good side and they'll be challenging for (promotion to) the Premier League this year.

"The top six is their target and when you see them play in full flow, you can see them being there.

"We gave it everything in the second half, which pleased me. It wasn't there but we move on."