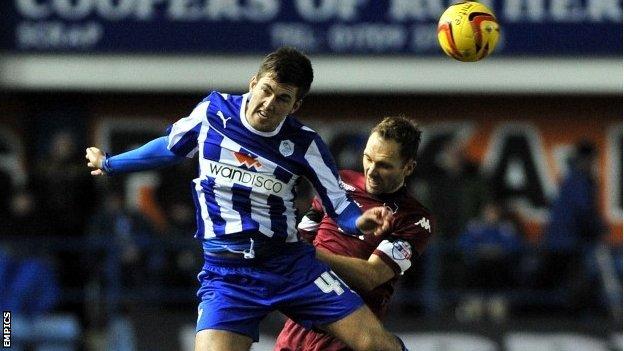 The Chelsea loanee curled the ball home from 20 yards to move Steve McClaren's side within two points of second-placed Burnley in the Championship.

But their lack of cutting edge in front of goal was eventually punished.

Wednesday defender Glenn Loovens had a header cleared off the line by Craig Bryson in a first half low on chances.

At the other end, Will Hughes managed to jink through the home defence but hit a weak effort at Chris Kirkland with team-mate Jamie Ward much better placed.

The home side looked a lot more threatening after the break and quickly made their intentions clear when Antonio cut inside and forced Grant into a smart save down to his left.

Bryson had to be alert again to prevent Chris Maguire's low corner from finding its way into the net before Antonio tested Grant with two further goal-bound efforts.

There looked to be only one winner in the game until Bamford picked up the ball from left-back Andre Wisdom and bent it into the net off the underside of the crossbar.