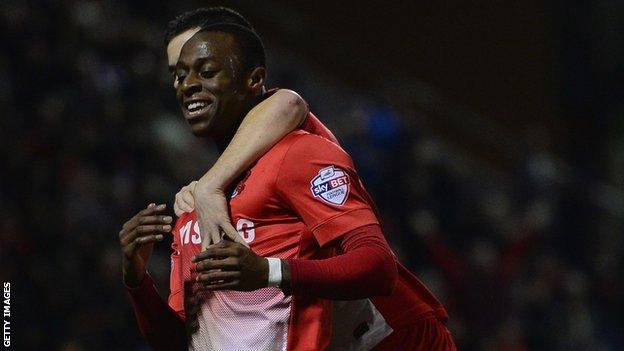 Moses Odubajo and Chris Dagnall both scored as Orient ended a run of four league games without a win and leapfrogged Wolves on goal difference.

Orient started well and Odubajo reacted quickest to Dagnall's parried effort to score his ninth goal of the season.

And Dagnall soon doubled the lead when David Mooney pounced on an error and squared it for the striker to tap in.

The O's were dominant and both Odubajo and Dagnall could have added more but the former saw his shot well saved and the latter could only head over the bar.

Stevenage have struggled away from home this season, and this defeat made it one point in seven away games, but they had the better of the chances in the second half.

The result left Graham Westley's men bottom of the table six points adrift of safety but with two games in hand on Crewe in 20th.

"It was a good, solid performance - particularly in the first half where I thought we dominated and should have got ourselves up to a third goal.

"Stevenage came back and gave it a real go in the second half.

"We were positive, played with good energy, moved the ball quickly and created a lot of openings. They struggled to come to terms with that and changed their shape."

"As the game wore on we got stronger and certainly it was a pretty even second half.

"The chances were there for us, we weren't as clinical as they were.

"When you've not been winning games, the confidence on the whole isn't there.

"Our destiny is going to be decided by games against teams in the bottom eight or 10.

"We've got to make sure that we're ready for these home fixtures and I think the lads are confident."