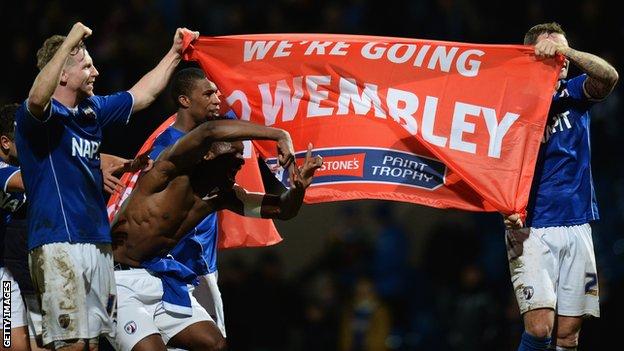 The hosts, who led 3-1 from the first leg, dominated the first half but Fleetwood keeper Chris Maxwell thwarted Jay O'Shea and Marc Richards twice.

Substitute Eoin Doyle missed two great chances to seal it for the Spireites before Jon Parkin poked home in the dying moments to spark a tense finale.

The Spireites, top of League Two, have now reached the final twice in three seasons, having won the Trophy in 2012.

The Cod Army started brightly and home defender Ian Evatt was forced into an excellent last-ditch block to stop Jamille Matt converting a cross from six yards out.

In an entertaining opening it was the hosts who threatened next with Jimmy Ryan and Richards both forcing saves from Maxwell and Sam Hird seeing his shot blocked.

Richards brought another save out of the Fleetwood shot-stopper from Ritchie Humphreys' lofted pass as the hosts finished the half on top.

The second period began in a much cagier fashion with neither side able to create a clear-cut opening.

With time starting to run out, Antoni Sarcevic's goalbound effort was blocked and Fleetwood substitute Matthew Hughes was booked for diving in the area.

Home sub Doyle twice failed to finish Gary Roberts' crosses when well-placed and he was made to pay for profligacy when veteran Parkin slotted in after poor defending.

The visitors' attempts to force a second goal and a penalty shoot-out were ultimately fruitless as Chesterfield saw the game out to go through to Wembley on 30 March.

"We wanted to come here, be in the game after an hour and then give it all we'd got, and that's what we did.

"The lads were fantastic tonight - they've left everything out on that pitch. They came and won the game, but it wasn't enough. The damage was done at Highbury.

"It's glorious failure, which we don't want. We want ugly wins and ugly success. But if you're going to go out, that's the way to go out - by giving it a good go against a good team.

"Over the two legs, Chesterfield deserve to be in the final."