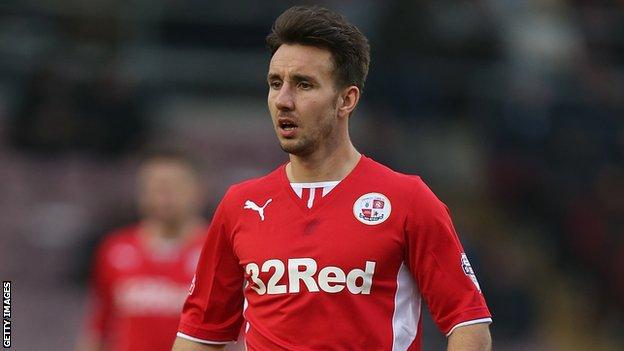 Matt Tubbs scored a dramatic late equaliser, after earlier missing a penalty, to earn Crawley a draw and deny Stevenage a third win in a row.

Tubbs collected a pass from Dannie Bulman and beat Stevenage keeper Chris Day in the second minute of injury-time for his sixth goal in five games.

Dembele had headed Stevenage into the lead in his third game for the club.

"It really didn't feel like it was going to be our night, not too many things went for us and on other nights we have been fortunate things have worked out great for us.

"Our lads kept going, the spirit these boys have got you can never right them off and it was certainly not more than we deserved.

"I've got to rotate the squad to ensure the players are fresh, it's not easy but it's up to me to pick the right team. We've got such a pile of fixtures coming up and I cannot play the best 11 every time, I have to make changes."

"We took control in the first half. We really got on the front foot and played some intelligent football in the difficult conditions.

"At half-time it looked like there would only be one winner.

"We looked like a travelled side in the second half. Legs were weary. Lads who hadn't had a lot of football were starting to buckle under the work required.

"We couldn't ease the pressure. In the end you'd have to say they deserved the point and probably could have got more."