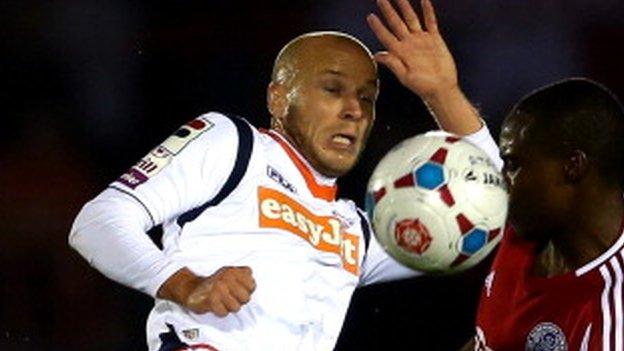 Three goals in the opening 17 minutes set Conference Premier leaders Luton Town on their way to a comfortable win over managerless Wrexham.

Luke Guttridge capitalised on poor marking to open the scoring.

Andre Gray's 12-yard strike was his 24th league goal of the season and Guttridge then netted his second from the edge of the box.

It completed a miserable evening for Wrexham in what was Billy Barr's first game in caretaker charge after Andy Morrell's departure.

Luton, whose manager John Still was celebrating a year in charge, extended their lead at the top of the table to 14 points.

"We're doing very well but we haven't won anything yet and it's really important we all recognise that.

"We played alright, but I don't think we were great in the first half. I know were four-nil up. but I thought we were better in the second half.

"My job is to make sure people concentrate on things that are important.

"We'll do some more work this week and look forward to Saturday."

"[Luton are] the best team I've seen in the Conference in many, many years. John's [Still] got them absolutely buzzing. They deserve to go up as champions.

"I thought the lads showed courage to try and played, but the problem area is what it has been for us and that's the final third.

"We're going to have to come back in on Thursday, dust ourselves down and work on the final third."