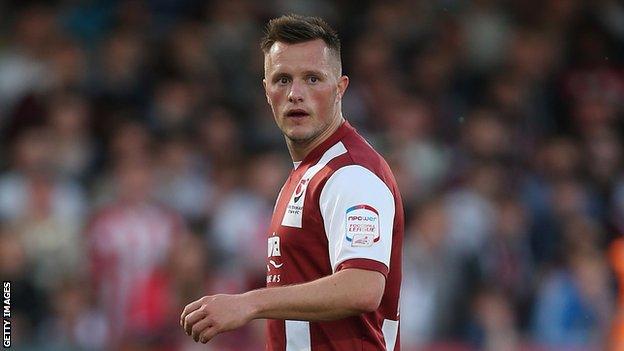 Hyde were relegated from the Conference Premier at promotion-chasing Alfreton Town where they slumped to their 30th league defeat of the season.

Greater Manchester side Hyde's only win this term was a 2-0 victory at Welling in January which ended a 29-match winless league run.

Hyde, who are 23 points adrift of second-from-bottom Tamworth, failed to test Reds goalkeeper Jon Worsnop before the break.

Their hopes of keeping what slim hopes of survival they had alive were barely stirred as Liam Tomsett called Worsnop into action on 68 minutes, with the Tigers already 2-0 down.

Defender Adam Blakeman twice went close to grabbing a consolation in stoppage time but again Alfreton's keeper was equal to his efforts.

"We knew it was going to be a difficult game because they've proved they're a decent team and they've got some forward players, so we knew we had to go out and set the right tempo and I thought we did that.

"If I'm honest, I think throughout the game we got a bit sloppy. A lot of players were having too many touches and then you're inviting the tackle and then all of a sudden, you're on the back foot again.

"But we certainly did enough in the game to win it far more comfortably than 3-0. I said at half-time, we can't keep missing the chances we're missing, because we paid the price for that on Saturday.

"Fortunately they didn't have enough to punish us, where better sides would have done. "