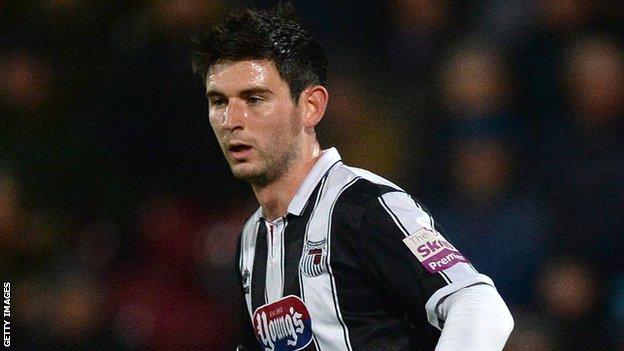 Grimsby completed the double over Wrexham to move into the Conference Premier play-off places.

Wrexham were restricted to one first-half effort with James McKeown saving with his legs to deny Johnny Hunt's header.

Joe Anyinsah and Hunt went close before Joe Clarke had a header cleared off the line in the final minutes.

But a well-organised Grimsby held on for win which moves them up to third in the table, while Wrexham are still seeking their first win under new manager Kevin Wilkin.

Wrexham manager Kevin Wilkin told BBC Radio Wales: "Again we started the game slowly. I knew Grimsby would come out and want to get right in our faces and have a bit of a go at us.

"As the game moved on we grew in confidence and in the second half we started getting hold of the ball up-front and it made a big difference to what we're about.

"We just need one or two of those breaks to go for you now just to turn the situation we found ourselves.

"But it gives me heart, the attitude that they showed. People are showing the endeavour."

"I'd like to get another goal to make it a bit more comfortable, but overall three clean sheets is a fantastic achievement.

"I felt we had the upper-hand in the first period but second half we had spells, but they obviously threw men forward.

"They're in a position where they've not got much to lose and trying to impress the new manager, but in general I felt we were pretty comfortable.

"We said tonight this was our opportunity so let's grab that, get in the top five and from then on the aim is obviously to stay in there. "