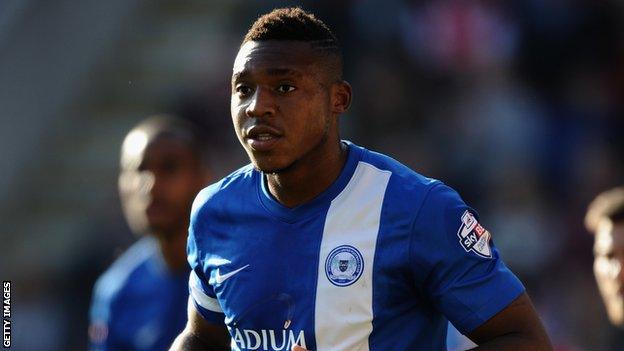 Peterborough boosted their League One play-off chances with victory over struggling Colchester.

Posh, on a high after winning the Johnstone's Paint Trophy victory on Sunday, were in front when Tommy Rowe headed in Grant McCann's corner.

Danny Swanson should have doubled the lead but poked wide, before Britt Assombalonga raced clear for his 29th goal of the season.

A Britt of alright

Posh boss Darren Ferguson wanted Sunday's 3-1 win over Chesterfield at Wembley to be the catalyst for his side's push for promotion back to the Championship a year after relegation.

This victory puts them four points clear of the chasing pack for the final play-off berth, with a game in hand over the teams below.

Peterborough started confidently against a side with just one win in their previous six outings, with Tosin Olufemi clearing Shaun Brisley's effort off the line and McCann curling an effort on to the the post.

Posh finally took the lead when Rowe rose to head in McCann's corner midway through the first half.

And the U's, unable to register a shot on target all night, contributed to their own downfall when Assombalonga charged down a Magnus Okuonghae clearance and sprinted into the area to fizz a low shot past Sam Walker.

Colchester, who remain three points above the relegation zone, opened up more in the final 20 minutes, but Posh still made the better chances and McCann, Jack Payne and Assombalonga all went close to improving the scoreline.