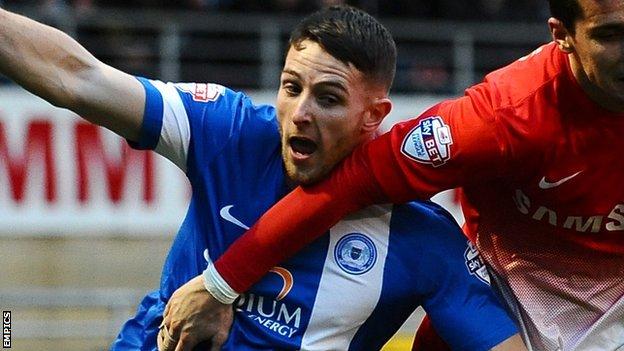 The 21-year-old striker is hoping for success at League One level after signing from League Two Newport County.

"Peterborough have got a great reputation, not as a selling club as such but as a developing club," he told BBC Radio Cambridgeshire.

"I've got the raw materials but I need to work on my all-round game, which is what the coaches here will help me do."

I felt it was the perfect move for me and the last couple of weeks have proved that.

Craig Mackail-Smith,George Boyd and Dwight Gayle have all progressed their careers after spells at London Road and now play in higher leagues.

"The standard is very, very good. Technically there are some really good players here," Washington said.

"It's another step up for me and I'm hoping I can prove myself at this level."

The striker scored seven goals in 32 appearances for Newport County earlier this season, but managed only one goal in 16 games for the club as they were promoted from the Conference Premier in 2012/13.

"Newport was a frustrating period for me. I hit the post four of five times.

"I should have got around 12 or 13 - which would have been good for a striker at that level," he said.

Washington was cup-tied for Peterborough's Football League Trophy match against Swindon but made his debut for Posh in Saturday's dramatic 2-1 league win away to Leyton Orient.

"I came on when the game was in the balance. The pitch was nice because I've played on some horrendous ones which haven't really suited my game."

He signed for Peterborough after what chairman Darragh MacAnthony described as a "horrendous" spell for the club but the striker is happy to be in Cambridgeshire.

"I felt it was the perfect move for me and the last couple of weeks have proved that."