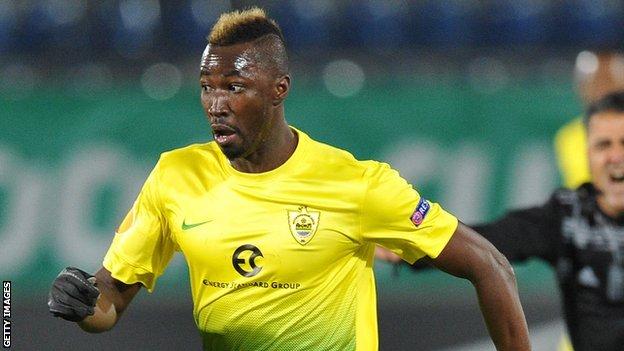 Ivory Coast striker Lacina Traore is set to make his debut for Everton against Crystal Palace on Wednesday.

The 23-year-old joined the English Premier League club last month on a loan deal from French side Monaco.

He arrived with a hamstring injury and Everton boss Roberto Martinez told the club's website: "I didn't expect him to be available just yet but he is.

"I think he will be involved somehow [against Palace] but I don't think he's ready to play 90 minutes yet."

The 6ft 8in forward was an unused substitute as Everton were beaten 1-0 at Tottenham on Sunday.

But with Martinez revealing Traore "is progressing really well", the giant Ivorian expected to be given a chance to make an impact coming on from the bench in Wednesday.

"It's just a case of getting him that match fitness to avoid any sort of risk. He is not far off," added Martinez.

Everton are sixth in the table, five points behind Liverpool, who sit fourth in the last Champions League spot.