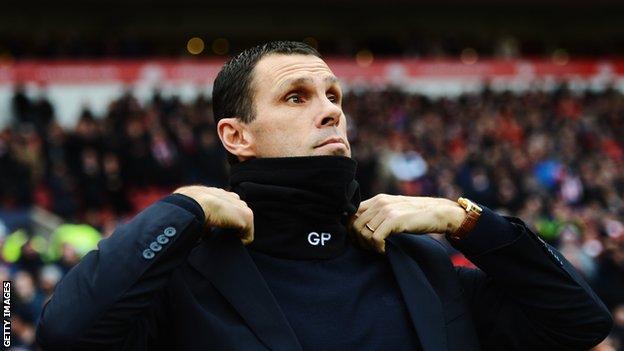 The Black Cats, fighting relegation, are seeking a first victory at the Etihad Stadium, but have won three of their last four away league games.

They will also face City in the Capital One Cup final on 2 March.

"We are a quite unexpected team," Poyet said. "Away from home we have been doing well. It's a big opportunity."

He added: "We are going to play to win the game."

Poyet suggested that a good result against City would boost his Sunderland side ahead of their cup meeting at Wembley.

"If we do well tomorrow, I am sure that we will go with a different attitude into the final," the Uruguayan said. "It will be important for the players."

Sunderland on the road

Pellegrini will go into Wednesday's match without the injured Sergio Aguero, Fernandinho and Samir Nasri - but all three are expected to be fit in time for England's first domestic cup final of the season.

"The idea is to go and try to perform, and see if we can be a difficult team to play against," Poyet continued.

In the Premier League era, only West Brom - in 2004-05 - have stayed up after being bottom at Christmas.

Sunderland then climbed out of the relegation zone after winning three and drawing the other of their last four away league games - although they dropped back into the bottom three after West Brom drew 1-1 with Chelsea on Tuesday night.

In contrast to their success on their travels, Poyet's side have won only one of their last four home league matches.

"It's been easier for some reason away from home," added Poyet.

After facing third-placed City, Sunderland's next league fixtures are against two of the other sides currently in the Premier League's top four - Arsenal and Liverpool.