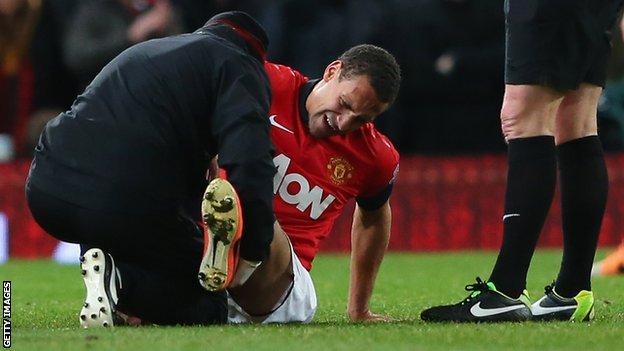 Manchester United boss David Moyes has dismissed reports that Rio Ferdinand will miss a club trip to Dubai amid claims the defender is set to retire.

The Sun newspaper claimed Ferdinand, 35, had been left out of a five-day warm-weather training camp - but United have said he is going.

"What was written was a load of rubbish - complete nonsense," Moyes said.

Ferdinand, whose contract expires this summer, has started only seven Premier League games this season.

In May last year, the former England captain signed a three-year deal with broadcaster BT Sport as "an interviewer, programme-maker and football expert".

But he appeared to dismiss suggestions that he would end his football career to concentrate on media opportunities, writing on Twitter that "it must be another slow news day."

Manchester United said last Friday that 32-year-old Nemanja Vidic, who formed a long-serving centre-back partnership with Ferdinand, would leave the club in the summer at the end of his contract.

The club's only other central defenders are Phil Jones, Chris Smalling and Jonny Evans.

Moyes's squad are heading to the Middle East during a 10-day break between matches,

After their Premier League trip to Arsenal on Wednesday, United do not play again until they visit Crystal Palace on 22 February.