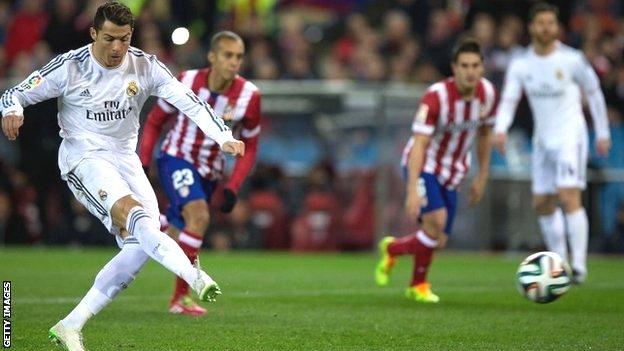 Real Madrid are on course for a Copa del Rey final against Barcelona after a 2-0 win at Atletico Madrid gave them a 5-0 aggregate semi-final victory.

Real have become the first team since 1916 not to concede a goal on their way to the final.

Cristiano Ronaldo scored two penalties with the second - his 34th of the season - coming after Gareth Bale was scythed down by Emiliano Insua.

Since Cristiano Ronaldo moved to Spain, no player has scored more than his 20 Copa del Rey goals (Lionel Messi has 19)

Like Real, their second leg is also away, but they are strong favourites to set up a sixth Clasico Copa del Rey final against their bitter rivals.

Real put the tie to bed after only 17 minutes against their cross-city rivals.

Their first goal came in the seventh minute when Ballon D'Or winner Ronaldo surged into the left-hand side of the area before being pushed over by Manquillo.

The Portuguese forward stepped up to the spot and rifled his effort to the right of Daniel Aranzubia.

The tie was over 10 minutes later. Bale, Real's £85m record signing, raced down the right before cutting into the area only to see his progress halted by Insua's ugly challenge.

Ronaldo once again chose the same spot to give Carlo Ancelotti's side a 2-0 lead at the Vicente Calderon.

At half-time the former Manchester United player was hit by a lighter which appeared to be thrown from the crowd.

Other than his two goals, there were few clear-cut chances in the match. Bale saw his free-kick pushed round the post by Aranzubia, before the 34-year-old goalkeeper made a fantastic block to prevent Ronaldo's half-volley from bursting the net.

Real's Iker Casillas was also at his acrobatic best late in the match to deny Jose Sosa from scoring with a snap-volley.