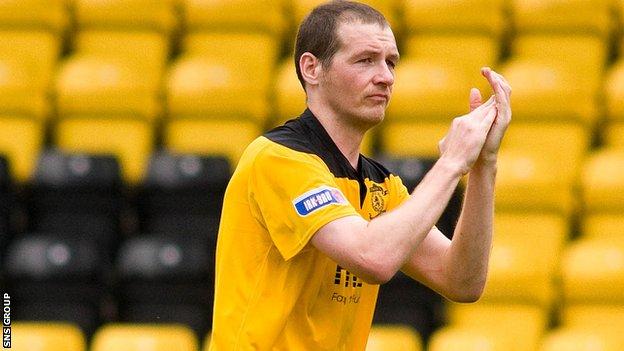 Kenny Deuchar has come out of retirement to play for Arbroath for the rest of the season.

The 33-year-old striker stepped down from football in 2012 to concentrate on his career as a doctor.

But a place in the British team at the forthcoming Medics World Cup has got 'Doctor Goals' back in the mood.

"The tournament just happens to be in Brazil, so I think the weather at Gayfield will be quite similar," he joked on BBC Radio Scotland.

Deuchar had spells with Falkirk, East Fife, Gretna and Livingston among others and played with Red Lichties boss Paul Sheerin while at St Johnstone.

"We got on well and kept in touch," he explained. "We did our coaching licence together.

"So Paul contacted me and I was looking for a team to train with.

"It's gone a wee bit better than I was expecting, given that I've been off for almost two years not really doing anything.

"We've just decided that there is nothing to lose really and I'll be available for a Saturday until the end of the season."

Deuchar, who scored six hat-tricks in one season when Gretna won the Third Division in 2005, has scored almost 150 career goals including a handful outside Scotland with Northampton and Real Salt Lake.

"The sharpness certainly isn't there but I'm working to get the aerobic fitness up," he conceded.

"I probably won't know exactly where I am until I step back into competitive action.

"I'm going out there to try and enjoy my football and hopefully Arbroath will see the benefit of that."

Deuchar's nose for goal should improve the Britain's chances of bettering consecutive third-place finishes at the Medics World Cup, which takes place in Natal in July.

The target man had initially been concerned that he was too rusty to be considered for selection despite his vast experience.

"I went down to Manchester for the trial in October and I was feeling that I wasn't doing very well," he recalls.

"It was only due to a fluke goal that they thought I was good enough to be in the team. It might have been my first goal from outside the box!"