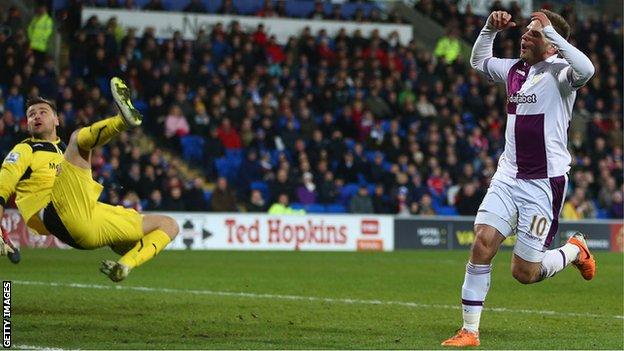 Cardiff manager Ole Gunnar Soskjaer says he would not swap David Marshall for any other goalkeeper.

The result leaves Cardiff rooted in the bottom three in the Premier League, but the Norwegian remains confident.

"That's the kind of performance we need from now until the end of the season. That will keep us up - a performance like today," said Solskjaer.

"David Marshall's been outstanding to make such a save at such an important time of the game, it earned us a point.

"The last save was just unbelievable. He moves his feet quickly and gets his arm up and that just sums up his season really.

"I wouldn't swap him for anyone, that's for sure."

"Marshy pulled off two world-class saves tonight - the one at the end and the one earlier on to his left," said the Scot.

Cardiff remain in 19th place in the Premier League, three points away from safety having won just once in their last 10 league matches.

They twice hit the woodwork during a dominant first-half display against Aston Villa, but were indebted to Marshall's acrobatic saves and a solid display from central defenders Ben Turner and Steven Caulker as the visitors took control after the break.

However Solskjaer, who took over in January following the departure of Malky Mackay, believes his team showed enough to instil confidence for the rest of their campaign - and wipe out the memory of last weekend's 3-0 defeat by Swansea.

"In the first half we were on top of them," Solskjaer said.

"We had as good a first-half performance as you could ask for, created massive chances and if you get that little bit of luck you feel you deserve you go in two or three-nil up.

"We should have had a penalty first half, but you have to take those chances."