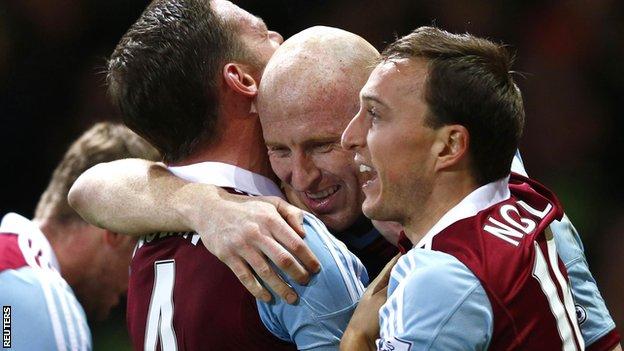 Sam Allardyce praised West Ham's defensive solidity as his side recorded their 13th clean sheet of the season - the most in the Premier League - in their 2-0 victory over Norwich.

A fourth shut-out in a row helped the Hammers move up to 10th in the table.

"To keep clean sheets in 50% of our games is the sort of record you normally get when you are going to finish in the top six," said Allardyce.

Late goals from James Collins and Mohamed Diame helped West Ham pick up their third successive 2-0 victory, but the Londoners were made to work hard for their victory by the Canaries.

Goalkeeper Adrian made fine saves from Gary Hooper, Robert Snodgrass and Alex Tettey to keep his side in the contest and ultimately help move them four points clear of the relegation zone.

"There was nothing between the teams today apart from the fact we were the ones who took our chances when they came our way," said Allardyce.

"Our goalkeeper made some outstanding saves when needed to keep it at 0-0 and our patience paid off.

"Three wins on the trot is a brilliant ask from the players and a brilliant response to what we wanted to do and what we knew we were capable of."

West Ham now have an 11-day break until they return to action with the visit of Southampton to Upton Park on 22 February.

West Ham have kept four consecutive clean sheets in the top flight for the first time since December 1985.

And Allardyce, 59. says he will be taking his players away for a short break ahead of that clash against the Saints.

"We're going to go away for some warm-weather training, which is important at this stage of the season," said the former Bolton, Newcastle and Blackburn manager.

"Players feel good with a bit of sunshine on their backs and they can get their minds rested and become physically rested.

"I've been doing it for the last 13-14 years now and I know by the data I have collected over that time how important it is to get these players away.

"That's why we've been fighting for many years for us to have a break like the rest of Europe.

"I always religiously fit one in because it's the right thing to do irrespective of where you are in the league and what you are doing in terms of form."