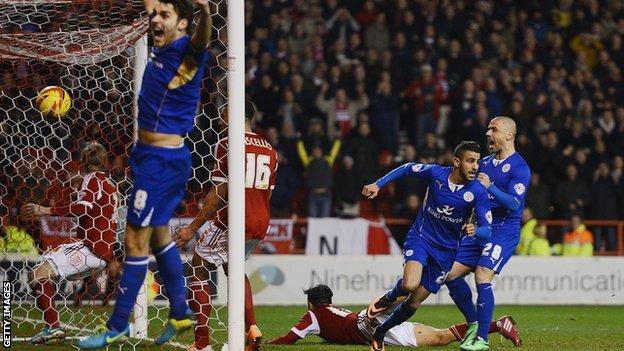 Ten-man Leicester City earned a point from a gripping promotion tussle with Nottingham Forest to move eight points clear at the top of the Championship.

Andy Reid's penalty after Wes Morgan's clumsy foul made it 2-1 to the hosts.

Paul Konchesky's red card left City up against it, but they earned a draw when Riyad Mahrez followed up to score after Kevin Phillips's penalty was saved.

It was tough luck on goalkeeper Karl Darlow, who produced a fine save to keep out the spot-kick as he tried to make amends for the blunder that gifted Leicester the lead.

But the goal was fully deserved and epitomised the spirit and determination that leaves the Foxes 10 points clear of third-placed Derby County with 15 games to play.

A match bristling with talented, pacy wingers and creative midfielders promised plenty of attacking quality, but despite flashes of brilliance - notably from the excellent Paterson - it was defensive blunders that settled the game.

Paterson went closest to breaking the deadlock in a lacklustre opening, the winger testing Foxes keeper Kasper Schmeichel with a decent strike after a jinking left-wing run.

Forest's Danny Collins had the only other effort on target until a long ball forward at the other end brought the first goal when Jamaal Lascelles and Darlow both hesitated.

The Forest keeper managed to push the ball weakly away but Vardy showed great awareness to react quickly and carefully steer the ball slowly over the line for his 11th goal of the season.

The home fans became restless, but Forest drew level when Paterson guided a superb instinctive header into the top corner following a corner - his ninth goal in 11 games.

And just four minutes later the Reds were leading thanks to a rare mistake from their former skipper Morgan, who dallied in possession and felled Jamie Mackie in the box.

Reid, who was so impressive in midfield, showed great composure from the penalty spot, crashing the ball low into the corner.

Forest manager Billy Davies was then sent to the stands at half-time for protesting that Morgan was not sent off for denying a goalscoring opportunity.

A period of brief calm followed that frantic error-strewn first-half finale but it soon got lively again,

David Nugent squandered a wonderful opportunity to level when he scuffed his shot wide from close range after good work from Danny Drinkwater.

And within a minute City's hopes of getting back into the game diminished greatly and it was more defensive indiscipline that cost them.

Former Forest loanee Konchesky was shown a straight red card for flying into a challenge with Mackie on the halfway line.

The hosts had chances to settle the match but appeared to tire in the closing stages and Leicester began to threaten.

And another mistake led to the game's final goal, this time from the otherwise superb Paterson who bundled over Drinkwater in the box.

Phillips saw his penalty saved by the diving Darlow, but when the ball was turned back into the middle by Matty James, Mahrez tapped it into net to earn a point and prevent Forest from moving up to fourth place in the table.

Nottingham Forest manager Billy Davies: "Wes Morgan was the luckiest player on the pitch. It was a clear goalscoring opportunity.

"I had an exchange of words with the referee. I asked him why it was not a red card, he said that it was not a goalscoring opportunity. He sent me to the stand, for raising my voice.

"We just ran out of juice. We were disappointed with the goals we gave away, but this was against a side at the top of the table and a side that has developed well over the years."

Leicester City manager Nigel Pearson: "These things happen. Wes, in the first half, just fell on him (Mackie). There was nothing malicious. It was just a wee bit clumsy. That happens in games.

"I try not to speak too much about individual incidents, the officials have a job to do and I can't make too many comments about it, without seeing things again."