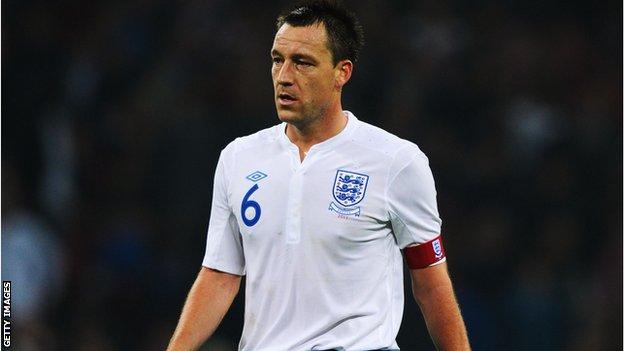 England manager Roy Hodgson has ruled out the prospect of Chelsea captain John Terry returning to the national side for this summer's World Cup.

Terry, 33, retired from international duty in September 2012 after winning 78 caps, shortly before he was found guilty by the Football Association of racially abusing QPR's Anton Ferdinand.

"The door isn't open because he has retired from international football," Hodgson told BBC Sport.

"When players retire, we move on."

The England boss added: "We moved on after our first qualification game, when John Terry limped off, and since that time we have chosen the players who are available, who have represented us well in my opinion, so we will continue with that.

Terry was stripped of the England captaincy by the FA in February 2012, before criminal proceedings began into his altercation with Ferdinand during Chelsea's clash with QPR at Loftus Road in October 2011.

In July 2012, he was cleared in court of committing any criminal offence, but felt the FA's decision to charge him meant his position with England was "untenable".

However, his performances alongside club colleague Gary Cahill this season have led to calls for his return to the England set-up.

Before injury ruled him out of their past two games, the Chelsea captain had played every minute of a league campaign in which his side had conceded only 20 times.

Last week, former Liverpool and Republic of Ireland defender Mark Lawrenson told BBC Sport: "If Roy Hodgson fails in Brazil, the press will go after him anyway, so why should he be bothered? His thought is to take the best 22 players he can - and John Terry would be one of them.

"All I would say to Roy Hodgson is that this could be your only stab at a World Cup as an England manager. So why would you not take the best English central defender? You forgive, but not necessarily forget with things like this."