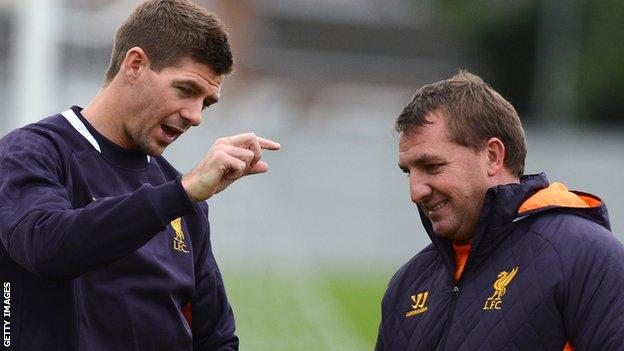 The 33-year-old has been successfully employed as a holding midfielder for the Reds this season.

"Everyone knows Steve's qualities, but it would be good for Roy to see him in that single pivot role," said Rodgers.

When Liverpool had six appeal

"He has amazed me with the quality he has. When he was playing as the number 10 or advanced midfielder, his movement was incredible. He had the movement of a striker in the box.

"So to flip that and become a playmaker in the other half of the field shows the tactical intelligence he has and how he has a lot to offer."

Hodgson is expected to name his provisional 30-man World Cup squad in May.

Rodgers believes that there could be several more Liverpool players who could force their way into Hodgson's thinking ahead of this summer's tournament in Brazil.

Jordan Henderson and Daniel Sturridge have been consistently impressive this season, while Raheem Sterling and young defender Jon Flanagan impressed in Saturday's 5-1 victory against Arsenal.

Rodgers added: "Jordan Henderson has shown his tactical development, maturity and leadership qualities, while Raheem Sterling, for a kid of 19 to be playing at the level he is, with invention, speed and scoring a couple of goals in a big game, has been absolutely outstanding.

"Sturridge speaks for himself, he'll get goals.

"His transformation from being a Chelsea reserve player to being what I consider to be the number nine for England for a World Cup is a good signal for, especially young British players, that if you come to Liverpool you will get your opportunity if your focus is right."