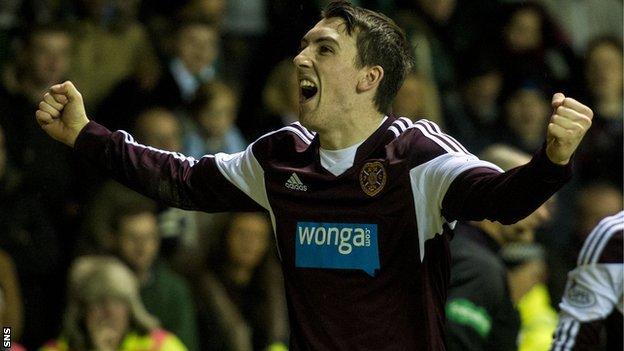 Hearts midfielder David Smith has been ruled out for six weeks with a fractured knee.

The 20-year-old sustained the injury in the Scottish League Cup semi-final defeat by Inverness Caledonian Thistle.

Manager Gary Locke told the club's website: "It's a massive blow for the lad as I thought he had being doing fantastic for us recently.

"The problem flared up after some gym work and we sent him for a scan [on Tuesday]."

He doesn't require any surgery and just has to rest, then things should settle down.

That scan revealed a hairline fracture within the knee of Smith, who scored in a 2-1 Edinburgh derby loss to Hibernian in January.

"He doesn't require any surgery and just has to rest, then things should settle down," said Locke.

"We are looking at around four to six weeks, though, which is a big blow at this stage of the season."

Hearts are still in the process of trying to come out of administration and Locke's squad is already without the injured Jason Holt and Jamie Walker.

The Tynecastle side travel to Inverness for a Scottish Premiership fixture on Saturday.