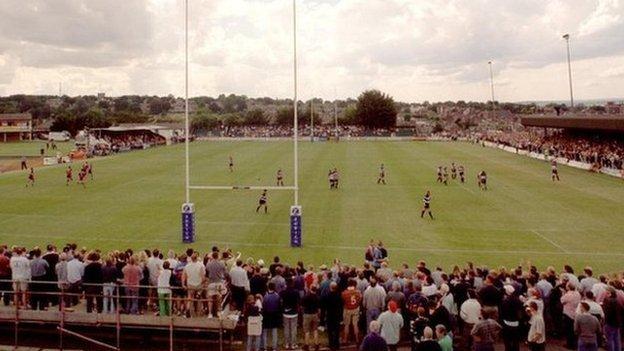 Mansfield Town are in negotiations with Championship rugby union side Rotherham Titans about a possible groundshare agreement for next season.

Titans, who play at the 2,500-capacity Clifton Lane, need to have a minimum capacity of 10,000 should they win promotion to the Premiership.

"Requirements to stage rugby matches at the level which Rotherham Titans [hope to] play at require grounds to be at a minimum of 10,000 capacity and so we are looking to increase capacity at One Call Stadium by a further 800 to ensure the criteria is met."

Mansfield is about 30 miles from Rotherham. The only time Rotherham have played their home games away from Clifton Lane was during a one-season stay in the Premiership in 2003-04 to satisfy promotion criteria, when they played at the now demolished Millmoor.

Mansfield and Rotherham are about 30 miles apart.

Rotherham are currently third in rugby's Championship, only two points behind leaders London Welsh, with the top four to contest end-of-season play-offs for a place in the Premiership.

The Titans last played in the top flight in 2003-04, but would not be able to do so next term, should they win the play-offs, unless they meet the Premiership ground criteria.

They hold the record for the longest losing streak in Premiership history, a run of 30 defeats stretching from February 2001 to the end of the season in 2004.

"Hopefully a mutual agreement will be reached soon which will benefit both Mansfield Town Football Club and Rotherham Titans," Broughton added.

Earlier this month, Radford reduced his loans to the Stags from £100,000 to £34,000 per month, appealing for extra investment.