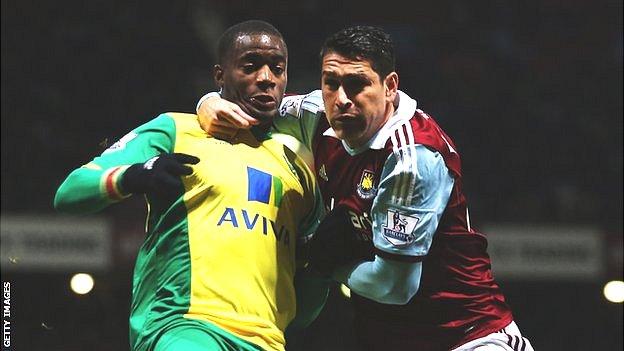 The Canaries missed a series of chances against their relegation rivals, who scored twice late on.

"I feel like I'm dreaming or it's a nightmare. I don't even know how we could have lost this game," Bassong told BBC Radio Norfolk.

Gary Hooper, Robert Snodgrass and Alex Tettey all saw their efforts saved by Hammers keeper Adrian and Norwich were punished for their wastefulness, as James Collins and Mohamed Diame struck in the final six minutes.

The result lifted West Ham three points clear of their opponents, who are now one point above the relegation zone and have scored just five goals in their last 11 Premier League games.

"When it is still 0-0, no matter how good we are, there is still a chance for us to concede a goal - and that's what happened and it's what has happened most of the season."

Bassong, who suffered relegation with Newcastle five years ago, says Chris Hughton's side have the ability avoid the drop this season.

"With Newcastle it was a bit different. We didn't produce anything," he said.

"Here we produce some good stuff. We just need to make up the small margins.

"I'm staying cool. I'm still confident and I know we're going to bounce back. This defeat is hard to take."