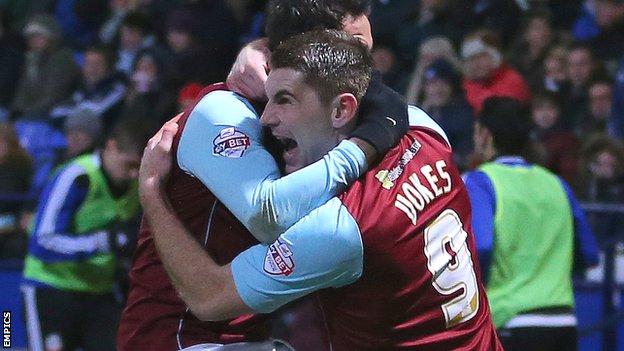 Burnley manager Sean Dyche has described the improvement made by Sam Vokes as "miraculous" after the striker netted the winner at Bolton.

Wales international Vokes, 24, scored his 16th goal of the campaign in a 1-0 win at the Reebok Stadium on Tuesday.

Sam Vokes won the Championship title with Wolves in 2009 and was on loan at Norwich in the latter stages of the 2010-11 season, when the Canaries reached the Premier League

"There's been a lot of talk about our other players, but he [Vokes] been absolutely outstanding," former Watford boss Dyche told BBC Radio Lancashire.

"The way he's developed this season as a player is miraculous."

The former Bournemouth and Wolves forward, who signed a new contract in January, is enjoying the most prolific campaign of his career to date - his previous best goal tally was 12 for the Cherries, then in League One, in 2007-08.

The goals of Vokes and strike partner Danny Ings, who has scored 24 times for the Clarets this term, have propelled Dyche's side up to second in the Championship, three points above third-placed Queens Park Rangers.

Bolton, however, are struggling. Dougie Freedman is coming under increasing pressure at the Reebok Stadium as Wanderers slip closer to the relegation zone and, after the game, Dyche offered his support to Bolton manager.

"They're a good side and they were on the first day of the season," said the 42-year-old, referencing the 1-1 draw between the sides on the opening day. "When people ask me who the better sides we've played are, I say Bolton.

"They are where they are [19th in the table] for whatever reason. I'm sure Dougie and his staff are trying to define that.

"They made it a really tough game, as we expected it would be, but overall I'm happy with the result and I thought we deserved it."