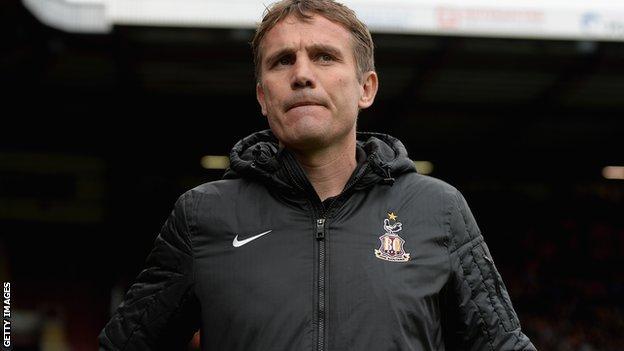 Bradford City boss Phil Parkinson has said his team need to keep working hard after their winless run stretched to 13 with a 1-0 loss at Carlisle on Tuesday.

The Bantams are now just five points above the League One relegation zone having not won since 23 November.

"The only way out of a scenario like this is hard work," Parkinson told BBC Radio Leeds.

"They're a good set of lads and they are giving us everything. We just need a break from somewhere."

Bradford have drawn 14 of their 30 league games this season, more than any other side in the Football League.

He added: "We have to keep the lads as confident as we can and work together to grind out a result somewhere.

"Our form is terrible and we can't hide away from that but there have been games that we should have got more out of."

Parkinson's side were fifth in the table following their last victory - a 3-2 win over MK Dons - but have now fallen down to 13th position.

He felt his side were unlucky to go down to defeat at Brunton Park.

"We completely dominated the second half and that is the frustrating thing from our point of view," he said.

"The lads were low at half-time but we lifted them and they had their say as well.

"They kept going really well and I don't want them to ever lose that."

They travel to Sixfields to play Coventry, who sit one place and two points above the Bantams, on Saturday.