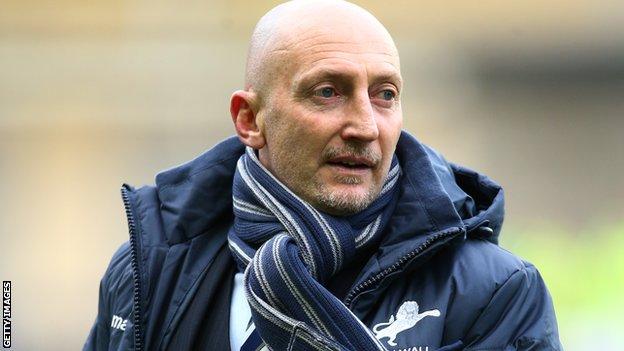 Millwall manager Ian Holloway is seeing signs of progress at the club.

The 50-year-old took charge last month and the Lions are now three points above the Championship relegation zone.

He told BBC London 94.9: "I knew it would be a tough job. The appetite for what I am asking them to do is what is pleasing me the most.

"That is six games now. Unfortunately we have only got five points but each performance I have seen them give me, they give me everything."

Former Crystal Palace manager Holloway took charge at The Den prior to the trip to Huddersfield in January, when the Lions were one point above the bottom three.

After defeat in his opening game, Millwall have won one and drawn two, with two defeats coming against promotion-chasing duo Burnley and Reading.

Despite mixed results Holloway feels his message is coming across.

"If you have got attacking players they need to know how to defend and where to get.

"I know what I want to do and how I want to do it. I think they are playing for the badge with massive amounts of pride now."

Millwall drew 1-1 at fellow strugglers Yeovil on Tuesday evening and Holloway was pleased his side found an equaliser after falling behind midway through the second half.

"I think we are better than we believe we are at the moment," he said. "I can't fault the effort or the work-rate and the character was fantastic. I was delighted with our resilience.

"It feels like a morale-boosting moment because I feel we have looked mentally weak when goals go in. I was pleased with the reaction."