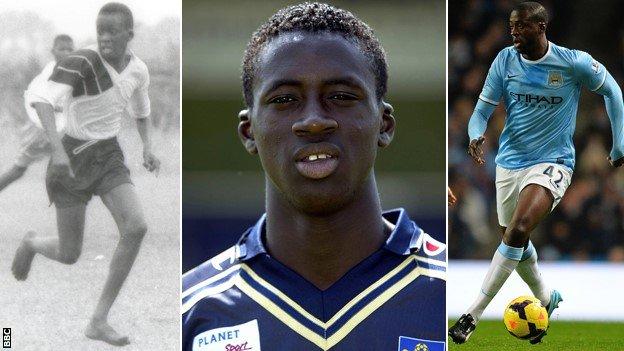 According to the people who know him best, Yaya Toure always had the ability and ambition he needed to make his journey from a barefooted boy footballer to one of the best players in the world.

But, even for someone as gifted as the Manchester City midfielder, those attributes on their own might not have been enough.

Ahead of this week's mouth-watering Champions League clash with his former club Barcelona, the 30-year-old has two men in particular to thank for the shape of his unique career so far.

The first is former France international Jean-Marc Guillou, a football eccentric, pioneering coach and one of Arsene Wenger's oldest allies. He moulded Toure as a player and a personality, and brought him to Europe from Ivory Coast.

All of Jean-Marc Guillou's teams train barefooted because he believes that reduces the chance of injury and improves a player's touch.

They also practice and play some games without a goalkeeper because Guillou feels it improves his players' defensive capabilities and makes them want to win the ball back higher up the pitch.

During his time working with ASEC, he developed players such as Gervinho, Emmanuel Eboue, Kolo Toure, Salomon Kalou and Didier Zokora.

"I realised very quickly, when I first saw him aged 12, that Yaya had huge potential," Guillou told BBC Sport. "He was the one who could, later on, be a rival to the best players in the world. For me, it is a pleasure to have played my part in making that happen."

Then there is Dimitri Seluk, a Ukrainian agent who claims he is different from others in his profession because, as he puts it: "I like my players more than I like money."

He helped make Toure a millionaire and also took him on a tour of some unlikely European clubs. During that time, they forged a bond so strong that Toure named his second child Dimitri after his friend and adviser.

"When he was young, I put Yaya in more difficult situations so he had to grow and have a stronger personality," Seluk told BBC Sport. "Everywhere he went, he proved himself, and that has paid off for him in the end."

Because of Seluk, Toure's story features chapters in Ukraine, Greece, Monaco, Spain and Manchester but it began when Guillou first noticed the fledgling talent in a trial match at his academy at ASEC Mimosas in the Ivorian city of Abidjan.

"Nobody had talked about him to me," Guillou said. "Even his older brother Kolo, who already played for us, had not mentioned him.

"Above anything else, it was Yaya's technical ability and performance in that game which made me decide to take him on myself straight away."

Under Guillou's tutelage, Toure's skills developed and so did his personality. Shortly before his move to Europe, aged 18, he made his own decision about where he was best off playing.

"He left our academy to join our partner club but came back to train with us after two weeks because he thought he was wasting his time over there," Guillou recalled.

"Six months later, knowing that, I took him to Belgium because as well as his talent he had showed me he had character and he knew what he wanted."

Toure was one of 24 Ivorians to join KSK Beveren in 2001 in an experiment staged by Guillou that saw him buy a club, then use Belgium's more relaxed naturalisation laws to import his academy players en masse and play them in the country's top division.

None of them are still in Beveren, and Toure's old club does not even exist - it merged with a neighbouring team in 2010. But people in the town have not forgotten Toure, or his attitude.

Danny Stuer, Beveren's fitness trainer when Toure played for them, recalls "a tall, skinny guy" who lived on junk food but desperately wanted to improve his physique.

"Now I look at Yaya and see a top athlete but, back then, he needed more muscles," Stuer told BBC Sport. "He knew he had to work to get a good result, so he was in my gym all the time. I worked with him practically every day and his build altered a lot."

Toure was taking the first steps towards becoming the midfield powerhouse we know today.

But while his physique was changing then, his dedication did not.

"He was a lovely guy, quite shy," added Stuer. "When the other players received money, they would go out and buy beer, while Yaya always stayed in his apartment, focusing on the next day's training or the next game. He always had a vision - he wanted to play for a great team."

That team could have been Arsenal. Their boss Wenger was following Toure's progress closely and the midfielder went on trial with the Gunners in 2003, playing in a friendly against Barnet and hoping to join older brother Kolo in north London.

However, passport issues prevented the switch to England and moves to two bigger Belgian clubs, Anderlecht and Club Brugge, also fell through when they refused to pay Beveren's £2m asking price.

Instead, with Seluk now pulling the strings, Toure went east, joining Metalurh Donetsk in Ukraine with two of Beveren's other Ivorians; Arsene Ne and Igor Lolo.

His brother Kolo was against the move and Toure disliked the cold climate, but he did not stop applying himself. He has described the 18 months he spent in Donetsk as the time when he learned that "football was a job".

"He went to Ukraine and developed, not only in football but in life too," Seluk explained. "Yaya had no family there, so of course I helped him. But after his time in Ukraine, he had a stronger mentality."

The next stop was Olympiakos, in Greece, where his coach was Trond Sollied. The Norwegian was the coach who had tried to sign Toure for Brugge in 2003 - and this time had the necessary funds when Seluk said the Ivorian was available.

"I had first seen him in Belgium," Sollied said. "Beveren had an outstanding team and he was one of their biggest talents. He was a diamond.

Favourite players as a boy: Patrick Vieira and Socrates

Honours won: The 2009 Champions League. League titles in Greece, Spain and England, and domestic cups in each country too.

"Then he went away to Metalurh and learned about surviving football. I knew his agent and kept in touch. He contacted me before I started with Olympiakos and this was my opportunity to sign him.

"Yaya loved it in Greece - the weather and the way we played was perfect for him. Our fans adored him. After his time in Ukraine, it was like seeing somebody get a new life after living in a mine. From day one, he was a sensation.

"He was very easy to work with, very calm and always with the right attitude. He just grew and grew as a leader and his progress was like a never-ending story."

Excelling in the centre of midfield alongside veteran Brazilian Rivaldo, Toure secured his first serious silverware.

He helped Olympiakos win the Greek league and cup double, tasted Champions League football for the first time and then played in the 2006 World Cup for Ivory Coast.

Having attracted the attention of other teams, he moved to Monaco later that summer.

"Even at a very big club like Olympiakos, we knew we were just one step for Yaya," Sollied added. "We knew he had to take another step for himself."

Again it was Seluk who orchestrated the move. And, again, Toure was happy to trust Seluk's judgement about where he should play next.

"There is a reason clubs trust me if I recommend a player," Seluk said. "For example, I recommended Yaya to Olympiakos, and they sold him for twice the money he cost them.

"After that I recommended Yaya to Monaco. They also made twice the money they spent. Normally, if I recommend players to a club, everybody wins and nobody loses. I don't see one club who loses money with me.

"Yaya trusts me 100% too. Before Ukraine, Kolo told him it was not good to go there, but instead he listened to me.

"We signed the contract for Metalist in Barcelona and I told Yaya that, in three or four years, you will play here in Barcelona too."

Seluk was right. After a mixed season at Monaco ended with him scoring the goals that kept them in the French top flight, he got his dream move to Barca.

Toure's stint at the Nou Camp would end unhappily, as his game time was limited under boss Pep Guardiola, but it still included a Champions League triumph in 2009, with him playing at centre-back in the final against Manchester United, and two La Liga titles.

Since moving to City for £24m in 2010, he has won the FA Cup and the Premier League title, while developing from a dedicated defensive midfielder into a swashbuckling scorer of vital goals and, this season, adding wicked free-kicks to his repertoire.

His desire to keep improving echoes what he learnt at ASEC as a boy, according to Guilllou.

"One of our values is to instil this desire to always do better and make the most of each training session to get better," Guillou added.

"Yaya is a perfectionist. What a lot of players discover at the end of their careers, he discovered at the start."

What next? According to Seluk, Yaya is happy at City, and is focused on gathering more trophies, for the team and for himself.

He could win four this season, and is also eyeing a fourth-straight African player of the year award in 2014. And however many prizes he ends up with, he is unlikely to lose his appetite for more.

"He has only got one career," said Seluk. "He wants to make the most of it."