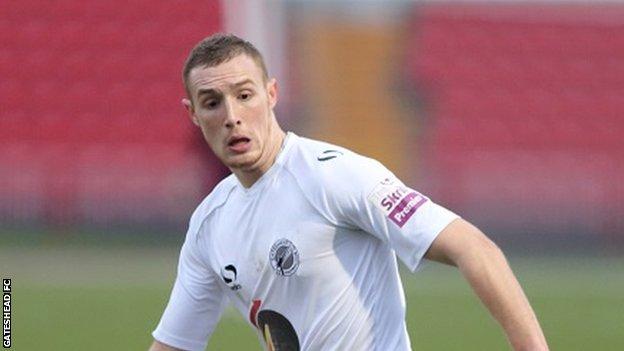 Winger Marcus Maddison says he has Gateshead manager Gary Mills to thank for putting his career back on track.

The 20-year-old admits he had an attitude problem before Mills persuaded him to knuckle down, leading him to being named January's Conference Premier player of the month.

"We've spoken a lot and he's made me understand how much potential I've got - and that I've been wasting it."

The wide midfielder joined Gateshead last summer after being released by Newcastle, who sent him on loan to Blyth Spartans and Scottish club St Johnstone before deciding to let him go.

Initially he struggled to adapt, and reached a nadir on 28 December when, after being substituted after 30 minutes with the team 1-0 down at Chester City, he stormed down the tunnel.

In the next game, at Halifax on New Year's Day, Mills brought him on with Gateshead 2-0 down at half-time. Maddison scored, set up two goals for team-mates, and hit the bar twice.

Since then he has started six out of seven games, with one substitute appearance, and has scored five times. He also won penalties in three successive games, against Aldershot, Grimsby and Welling.

"I've had to change my whole attitude to training, in fact to pretty much everything about my whole life," he added.

"I've spoken to Gary Mills a lot and he's got me working hard doing what's best for me and the team.

"Maybe I was a bit arrogant as a boy. Now I'd say I've grown up and matured a lot, which you have to when you're playing against men.

"We've spoke a lot since he's been here and Gary has made me understand how much potential I've got, and that I've been wasting it.

"It has been a good year for me so far and I have to keep it up. We are a really good team. There's been a big change in the confidence of the players and how we play, and we deserve to be where we are, in the top five."