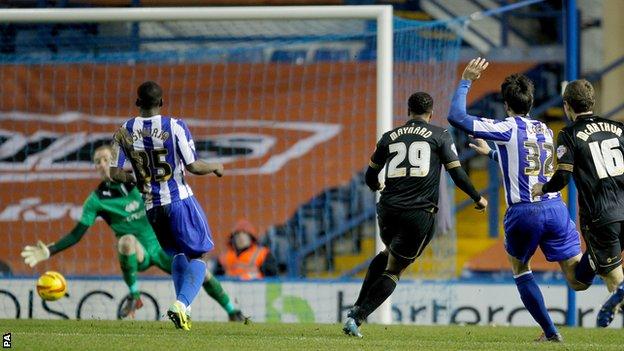 Maynard scored the first and claimed he got a touch to Martyn Waghorn's corner to make it 2-0, before sub Marc-Antoine Fortune completed a 3-0 victory.

"He was excellent, not only his goals, but his all-round play," said Rosler of Maynard, who is on loan from Cardiff.

"He looks sharp, motivated and knowledgeable about the game."

The German continued: "This will do him the world of good, and in the next weeks and months we will see a goalscorer who can be very important for us."

Maynard had made five previous appearances for the Latics, who lie ninth in the Championship, without scoring after joining in January for the remainder of the season.

But the 27-year-old will be unable to face his parent club when Wigan continue their defence of the FA Cup at Cardiff in a fifth-round tie on Saturday.

"I didn't know that, but FA Cup rules are clear," Rosler told BBC Radio Manchester. "Even if we'd have had permission, he's not allowed to face his own team in the FA Cup.

"Never mind - Nicky will be ready for Tuesday [against Barnsley at the DW Stadium] which is a very important game for us as well."