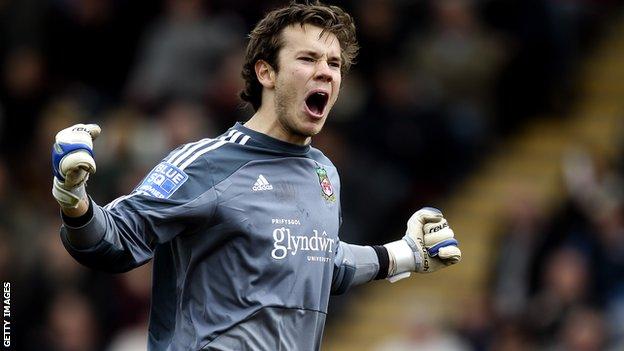 Chris Maxwell was delighted to make his first appearance for Fleetwood Town after nearly two years at the club.

The 23-year-old goalkeeper was the Cod Army's first signing following their promotion in May 2012.

After loan spells with Wrexham and Cambridge in the Conference Premier, he appeared in League Two for the first time in Tuesday's 1-1 draw at Wycombe.

"It's been a tough road but I'm glad to have finally made my debut," the goalkeeper told BBC Radio Lancashire.

"It's finally good to get a game. It's been 18 months of patience and being in and out of Fleetwood at various clubs [on loan]."

Scott Davies had been an ever-present for Fleetwood before the draw at Adams Park.

Maxwell, who kept 16 clean sheets in 24 league games during his time at Cambridge earlier this season, says it is a boost to be selected ahead of the 26-year-old.

"That's quite a compliment that he [manager Graham Alexander] has given me, because I know Scott's a very good goalkeeper and I've said nothing else but that since I've been at the club," continued Maxwell.

"He [Davies] will still always be a good friend of mine and it will be good to have that competition between us for the rest of the season."

Alexander, who said he will assess each position in his team on a game-by-game basis, said: "I talk about competition for places all over the pitch, and with Chris being at Cambridge for the first part of the season, Scott probably didn't have that.

"We had a couple of offers for Chris in January but we wanted to keep him to give us that competition. He deserves his chance and I thought he did well."