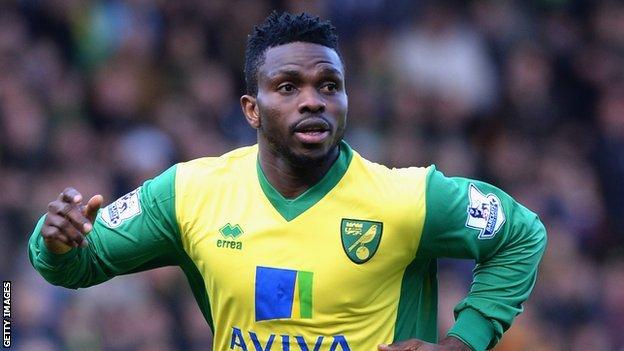 Nigeria have recalled Norwich City's Joseph Yobo to their squad for a friendly with Mexico in USA on 5 March.

The 33-year-old has not played for Nigeria since they won the Africa Cup of Nations in South Africa last year.

Yobo is Nigeria's most-capped player with 93 appearances and now has a chance to go to the World Cup.

As expected uncapped trio Imoh Ezekiel, Ramon Azeez and Michael Uchebo are in the squad too.

[The NFF] has given, and will continue to give, its unflinching support to Mr Keshi and the team to do Nigeria proud at the 20th FIFA World Cup finals

But there is no place in the squad for regular quintet Sunday Mba, Brown Ideye, John Ogu, Nnamdi Oduamadi and Chigozie Agbim.

In-form Villarreal striker Ikechukwu Uche and Stoke City's Peter Odemwingie have also been overlooked for the game in the United States.

It will be the second time in 10 months that the sides have met in a friendly in the US - they played out a 2-2 draw in Houston on 31 May.

"This friendly against Mexico will give us a chance to look at some new players before our final World Cup camp," Keshi continued.

"We are hoping to give everyone a chance to show what they can add to the team.

"It is important to emphasis that the Super Eagles door is not completely closed on anyone."

Nigeria face Argentina, Iran and Bosnia-Hercegovina in Group F at the 2014 World Cup, while Mexico play in Group A against hosts and five-time winners Brazil, Croatia and Cameroon.

Meanwhile, the Nigeria Football Federation [NFF] has denied media reports and speculation that they want to hire a foreign assistant for coach Keshi.

Local media reports have been suggesting the NFF have finalised plans to bring in a foreigner ahead of the World Cup in Brazil but the football authority issued a statement denying the rumour.

"The Technical and Development Committee would want to restate its stand that at no time did it contemplate, approve or recommend for the appointment of any foreign Technical Assistant to Head Coach of Super Eagles, Mr Stephen Keshi," read a statement.

"Committee reiterates the fact that it has given, and will continue to give, its unflinching support to Mr Keshi and the team to do Nigeria proud at the 20th FIFA World Cup finals, Brazil 2014."