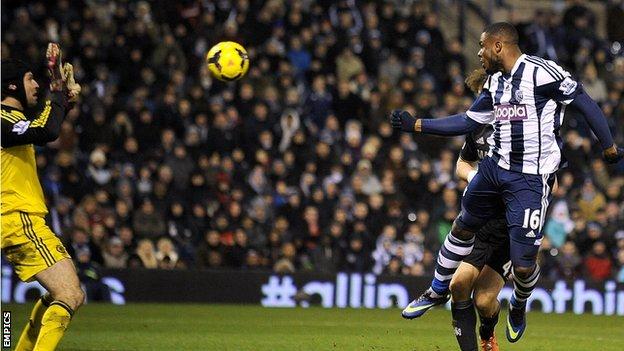 West Bromwich Albion striker Victor Anichebe says they must start turning draws into wins to keep away from the wrong end of the Premier League table.

Anichebe hit his second equaliser in successive home games to help earn the battling Baggies a 1-1 draw against Chelsea on Tuesday night, just as he did against Liverpool nine days before.

"Every game from now on is a big one," 25-year-old Anichebe told BBC WM.

"We have to start picking up three points from the teams around us."

We're not going for a jolly-up

Tuesday's win lifted them out of the Premier League relegation zone, but only on goal difference from Sunderland, whose game at Manchester City was called off on Wednesday night because of bad weather.

Albion are now four points clear of bottom club Fulham, their next opponents, but they are yet to win since head coach Pepe Mel took charge a month ago.

Their only victory in 17 games came in the New Year's Day 1-0 home triumph against Newcastle United, earned by Saido Berahino's late penalty, when they were still under the caretaker charge of Keith Downing.

With no FA Cup involvement this weekend, they headed off straight from Tuesday night's game for some warm-weather training on a mid-season break in southern Spain.

And Anichebe is insistent that Saturday's defeat at Crystal Palace is now forgotten and that they will return from their training camp in Jerez fully fired up for the key home game with Fulham on Saturday week.

"We're not going there for a jolly-up," added the Nigeria-born, Merseyside-bred summer signing from Everton. "We're going there to work. We have an important game coming up against Fulham.

"We could easily have hid after losing to Crystal Palace. But we went out against Chelsea with heads held high and took the game by the scruff of the neck.

"The manager didn't set us up to defend. He sent us out with an attacking team and he made some attacking substitutions.

"We took the game to them and it showed. We ended up with a point from a team going for everything, league, Champions League, the lot. And we could have nicked it."

Anichebe stole in ahead of his marker David Luiz to head Albion level, having been denied a penalty shortly before when the Chelsea defender was tugging his shirt in the area.

"It doesn't really matter who gets the goals," he added. "I'm just happy that we got the result and I have to pay credit to Saido Berahino, who put in a great ball."