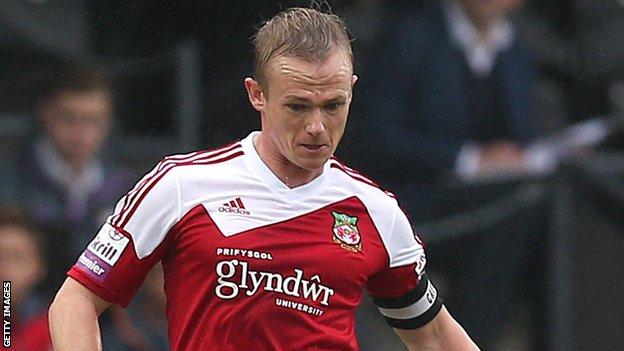 Captain Dean Keates admits Wrexham are running out of opportunities to climb into the Conference Premier play-off places.

Andy Morrell's side are currently 12th in the table, eight points off the play-off places.

Wrexham's play-off hopes were dealt a blow last Saturday when they lost 2-1 at home to struggling Dartford.

"We are in the last chance saloon I'd say. We've not got many chances left to get in there," Keates said.

"We can't look back at the previous 30 games of the season because we can't change them.

"There's 16 games to play - there's a lot of points to play for. There's 48 points that you're looking at playing for.

If we want to achieve an objective, and that's getting into the play-offs, we've got to go on a good run

"We're looking to winning as many as we can.

"There's still a chance there for us and we've got to dust ourselves off and get going again at Braintree."

Keates hopes the side can get back to winning ways at Braintree on Saturday and embark on another extended unbeaten run.

"We thought we'd turned a corner but obviously we got brought straight back down to earth with a massive bang," Keates said of the Dartford loss.

"If we want to achieve an objective, and that's getting into the play-offs, we've got to go on a good run.

"The lads have all got to pull together and we've got to put Dartford behind us.

Braintree Town have not played since 11 January due to a series of postponed matches and Saturday's game at the Amlin Stadium is subject to a Friday pitch inspection.