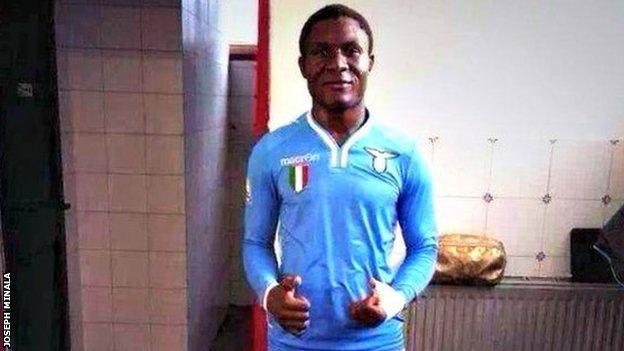 Lazio have threatened legal action against those who have questioned the legitimacy of the age of their 17-year-old Cameroonian player Joseph Minala.

The Italian side stated that his birth certificate is "absolutely legitimate".

Lazio added: "We reserve the right to take action against those responsible for the protection of the good name of the company and the footballer."

The midfielder also issued a statement via the club's website denying he told an African website he was 41.

He said: "I have read the alleged statements posted on the website senego.net in which it says I confessed my real age which was different to what was stated in my [official] documents.

On his face there is sign of his previous life, which was not a happy life. That is it. Period. There is nothing else that makes you think he is 41

"They are false statements that have been attributed to me by people who do not know."

Minala joined the Rome club last summer and recently played for them in the Viareggio Cup youth tournament.

Italian journalist Max Evangelista, who reports on Lazio's youth team, said any suggestions the player was 41 were "unbelievable".

He said Minala had scored five goals and made six assists this season for Lazio's youth team, who are the holders of the national title.

"He is a very reactive player. You could never say he is 41," he told BBC World Service." When you are surrounded by players running like devils around you, in my opinion it is very tough to be 41. He runs, he is fast. It is unbelievable news, that is why Lazio felt the need to deny it.

"He was in an orphanage for a couple of years in Cameroon, then he had to face the situation here by himself. It is a controversial story because the face of the player is not that of a 17-year-old guy.

"On his face there is sign of his previous life, which was not a happy life. That is it. Period. There is nothing else that makes you think he is 41.

"He is a kid with the head of a kid. He only wants to play football as he did on the road years ago barefoot. That is the only thing he is focused on and being a talent because he is a talent."