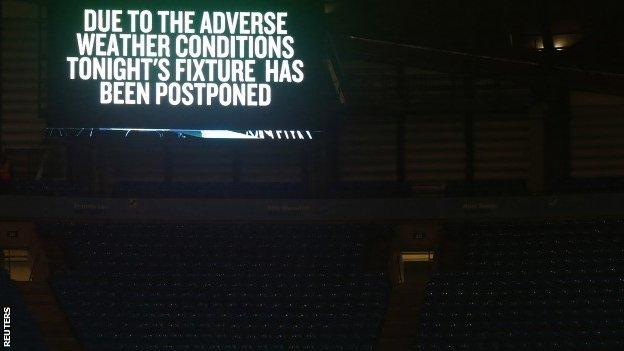 The Premier League games Manchester City and Everton were scheduled to host on Wednesday were postponed amid safety concerns caused by high winds.

City's meeting with Sunderland was called off by the club's safety officer and the local police "due to exceptional and escalating weather".

Police advised Everton to reschedule their match with Crystal Palace because of nearby building damage.

"Although the game could have gone ahead from a playing perspective, programme booths have been blowing over and a nearby wall has blown down so safety of fans cannot be guaranteed. There is no word yet on when the game will be rearranged for."

Neither club has yet announced when the rearranged fixtures will take place.

Stoke's home match against Swansea was only given the go-ahead after two safety inspections, with a 15-minute delay to kick-off.

Earlier in the day, the League One meeting between Sheffield United and Brentford was postponed after heavy rain waterlogged the Bramall Lane pitch.

Fans attending matches that survived the weather may still face considerable travel disruption, with gusts of wind in excess of 80mph causing delays and cancellations across the rail network and motorway closures.

Manchester City's schedule is already busy, with the club having reached the Capital One Cup final and still involved in the Champions League and FA Cup.

But manager Manuel Pellegrini, whose side may have gone top of the league had they beaten Sunderland, agreed with the decision to call off their match.

"We were ready to play this game, but the well-being of the people coming to the Etihad is paramount," he said,.

"We hope everybody gets home safely, both in Manchester and Sunderland."

Everton counterpart Roberto Martinez backed the decision to call off his club's game.

"Because of the wind, there has been a lot of building damage and the last thing we want is for any of the fans to get put in a position that is dangerous," he said.

"It is disappointing because we were ready to go out and warm up. The preparation was there for both teams and you get the anti-climax."