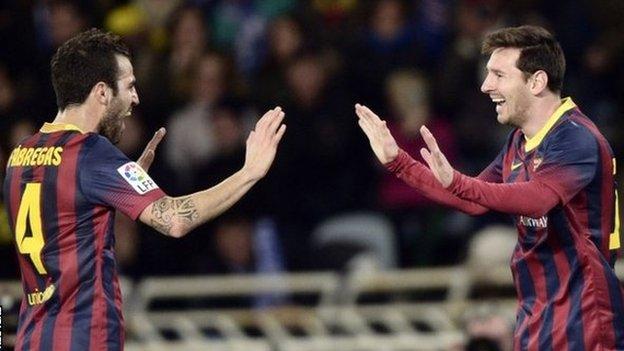 Barca led Real Sociedad 2-0 from the home leg last Wednesday and Messi sealed the tie when he picked the ball up on the halfway line and beat three defenders before firing home.

Antoine Griezmann added a late consolation to make it 3-1 overall but the Catalan side advanced with ease.

Barcelona will play Real Madrid at a yet-to-be-confirmed venue on 19 April.

Real reached the final on Tuesday by beating Atletico Madrid 2-0 to complete a 5-0 aggregate win.

Messi has started to find his form again amid an injury-hit season. After two months out, he failed to score in his first three games back, but has now netted four goals in as many games.

Whichever team wins the Copa del Rey, it will be a first major trophy for their coach in Spanish football. Carlo Ancelotti was named Real boss in the summer, with Gerardo Martino taking over at Barcelona.