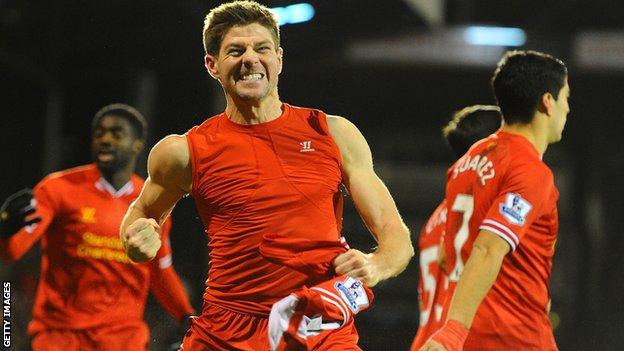 Brendan Rodgers says his Liverpool side "may be the chihuahuas that run in between the legs of the horses" as the Premier League title race intensifies.

The Northern Irishman made his quip in response to recent comments made by Chelsea manager Jose Mourinho.

The Blues boss has tried to play down his side's own chances by describing them as a "little horse."

A 3-2 win at Fulham on Wednesday put Liverpool within four points of Mourinho's table-topping side.

Reds skipper Steven Gerrard, whose injury-time penalty secured victory at Craven Cottage, is upbeat about his team's chances but say they "need to keep pushing".

He added: "If we're still in the mix when the Champions League restarts, then who knows what might happen?"

Liverpool have not won the title since 1989-90, but Chelsea still have to visit Anfield, as do third-placed Manchester City.

City and Arsenal are also in Champions League action next week, at home to Barcelona and Bayern Munich respectively, while Chelsea visit Galatasaray the week after.

In contrast, Liverpool have not got a midweek league game scheduled for the rest of the season.

"They have all got big Champions League games while we've only got to think about one game a week," said Gerrard.

Liverpool had to overcome a scare before seeing off bottom club Fulham.

The spot-kick was awarded by referee Phil Dowd after Sascha Riether's clumsy stoppage-time challenge on Sturridge.

Asked about Liverpool's title chances, Rodgers feels their rivals need to slip up.

"It's still the other teams to lose," he said. "They've more points than us. We'll just go into each game trying to improve on every facet of our game.