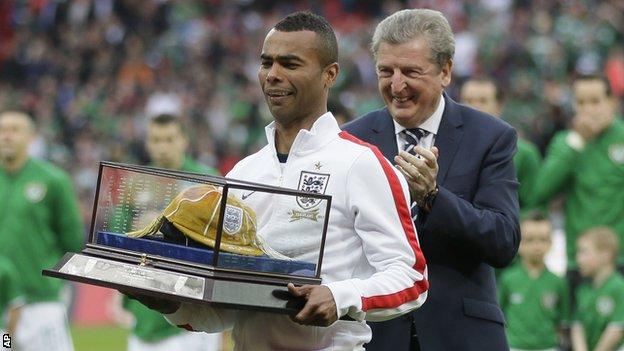 England manager Roy Hodgson says it will be difficult for Chelsea left-back Ashley Cole to secure a place in his starting XI at this summer's World Cup.

Cole, 33, has failed to command a regular spot for the Blues this season, while facing pressure from Everton's Leighton Baines for his England shirt.

"For years people have been understudy to Ashley," said Hodgson. "Now it's Ashley's turn to sit back."

Hodgson has also ruled out an England return for Cole's team-mate John Terry.

Chelsea skipper Terry, 33, retired from international football in September 2012, but had been touted for a comeback after an impressive season for the Premier League leaders.

However, club colleague Cole has been forced to largely watch from the sidelines, with Blues boss Jose Mourinho preferring to play Spain right-back Cesar Azpilicueta on the left in recent months.

"It's a bit of a problem when you are a full-back - you either play or you are an understudy," said Hodgson.

"We know what Ashley can do. We know how fit he keeps himself, how experienced he is.

"I certainly wouldn't write Ashley Cole out of any plans because he wasn't playing in his club team.

"But he will have to accept like everyone else that competition for his place in the club team and international team gets stronger all the time, and I will have a decision to make."

Cole skippered England in May's 1-1 draw against Republic of Ireland at Wembley, where he was presented with a commemorative golden cap by Hodgson ahead of kick-off to mark his 100th cap.

The former Arsenal defender, who has won 106 caps for England since making his debut against Albania in 2001, has started only three of Chelsea's 16 Premier League games since 2 November.

He began England's last game - a 1-0 friendly defeat by Germany - but has not played competitively since September's 0-0 draw in Ukraine.

Baines, 29, started the crucial World Cup games against Montenegro and Poland in November, when England sealed their place in Brazil, as Cole recovered from a rib injury.

The Everton defender looks likely to retain his place after assured displays, while Hodgson also admitted Southampton teenager Luke Shaw, 18, could force his way into his World Cup squad.