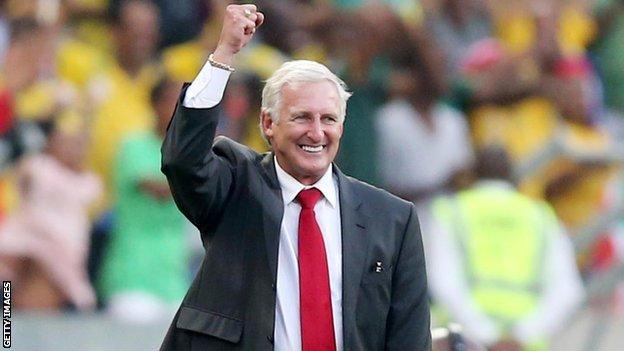 Gordon Igesund has been given the backing of the South Africa Football Association to continue as coach of the national football team.

There had been speculation in the media that he would be sacked following a poor performance at the recent African Nations Championship.

South Africa hosted the tournament for locally-based players but failed to reach the second round.

After their exit the team was branded "a bunch of losers'' by the country's sports minister Fikile Mbalula.

A joint meeting of the Safa Technical and International Affairs Committees on Thursday confirmed that Igesund will at least complete his contract, that runs until the end of June.

Igesund will announce his squad tomorrow to face five-time World Cup winners Brazil in a friendly on 5 March in Johannesburg.

In a statement released after the meeting Safa acknowledged: "that the Head Coach has failed to deliver on his mandates for the 2014 Fifa World Cup, the AFCON 2013 Tournament as well as the CHAN 2014 Tournament.

"The meeting decided that the Association does not want to act in an impromptu manner but rather, must plan systematically for immediate and future programs of the Men's Senior National Team and all of the other national teams, men and women.

"In this regard, the meeting decided that the Head Coach must continue with his work and in particular, get the Men's Senior National Team ready for the match between Bafana Bafana and Brazil scheduled for 05 March 2014."

It added that further discussions will be held "to ensure that we have certainty around the national team for the next Fifa World Cup cycle."

The meeting also decided that Safa will appoint a technical director next month to work with Igesund "to ensure full and systematic integration of the objectives and programmes of all national teams."