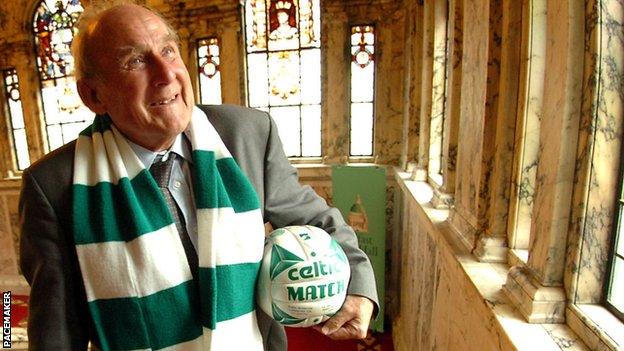 Jimmy Jones, scorer of a record number of goals in an Irish League season, has died at the age of 85.

Jones scored 74 goals for Lurgan club Glenavon during the 1956-57 season.

He started out with Belfast Celtic and had a short spell at Fulham before joining Glenavon, playing for them between 1951 and 1962.

During his time at Glenavon, the club won three league championship titles and three Irish Cups.

Before that he was part of the Belfast Celtic team which won the championship in 1947-48, just before the old Hoops pulled out of the Irish League for good.

"It is very sad to learn of the passing of Jimmy Jones. We will never see the like of him again," said Glenavon chairman Adrian Teer.

"He was a player, a captain and a manager at our club, and above all else he had a great personality.

"It is a sad day for his family and a sad day for Glenavon. Only a few months ago Jimmy was at Mourneview Park for the naming of the Jimmy Jones Suite in his memory."