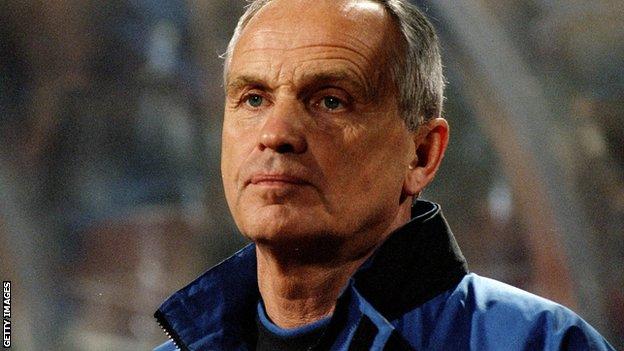 Former Denmark coach Richard Moller Nielsen, who led the national side to a surprise victory at the 1992 European Championship, has died aged 76.

Moller Nielsen had been ill since having an operation for a brain tumour in July last year.

Denmark's rise to becoming European champions was the pinnacle of a coaching career spanning four decades.

"An inspiration, my teacher and my friend. R.I.P my friend," tweeted ex-Denmark goalkeeper Peter Schmeichel.

Former Manchester United star Schmeichel played under Moller Nielsen throughout the coach's spell in charge of the national team, from 1990 to 1996.

Moller Nielsen, who led Denmark's Under-21 side between 1978 and 1989, later managed Finland and Israel.

But he is best remembered for success at Euro 1992, where Denmark were a late replacement for Yugoslavia, who were not allowed to participate because of civil war.

The Danes progressed from a group containing England, Sweden and France before beating holders Netherlands on penalties in the semi-finals.

Moller Nielsen's men secured the title with a 2-0 victory over heavy favourites Germany in the final.