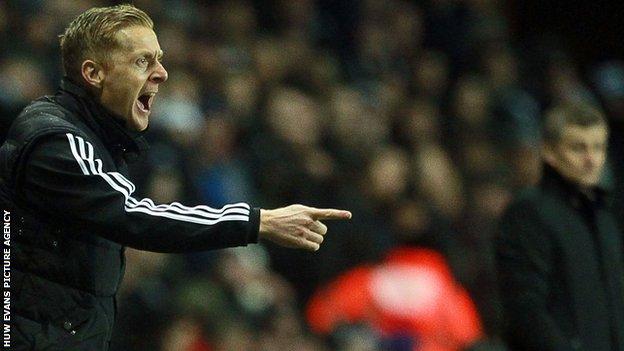 Garry Monk says Cardiff counterpart Ole Gunnar Solskjaer should get his own house in order before criticising Swansea City players.

"Ole should look at his own players before he starts looking at mine," Monk said.

The former Manchester United striker also claims there were incidents of foul play on some of his team by Swansea players, which were missed.

"If that was me going down like that, I think my father would have told me off," said Solskjaer.

"But then again you can look at [Angel] Rangel when he kicks [Wilfried] Zaha in the first-half. Nothing's mentioned about that one."

The comments have annoyed Monk who was put in charge for "the foreseeable future" at the Liberty Stadium after Swansea sacked Michael Laudrup.

"I saw Ole answering the question saying that my man Jon de Guzman made a meal of it," said Monk.

"When you receive an elbow in the back of the head and you just go down normal, I don't think that's an over-reaction.

"In the 35th minute in a corner for them [Cardiff] one of my players Wayne Routledge gets head butted and punched in the face by Kim [Bo-Kjung].

"If anything I'd be more concerned about something like that than saying that one of my players is play-acting.

"If you look at Wayne when he gets head-butted and punched in the face he stays on his feet and doesn't make a meal of it."

The FA say they are not investigating the alleged incident involving Routledge and Kim.

Cardiff City have been asked to comment on the claims.