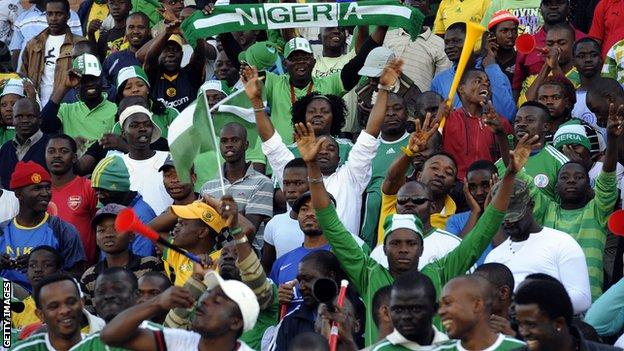 Players lying about their ages in world football is a problem the authorities have been struggling to get to grips with for a long time.

This week, the issue raised its head again when Lazio threatened legal action against those who questioned the age of their 17-year-old Cameroonian player Joseph Minala.

The Italian club have denied claims he is 41 and state that his birth certificate is "absolutely legitimate".

BBC Sport takes a closer look at the issue of age fraud in football, the reasons for it and what is being done to combat it.

Is age fraud a problem?

It is no secret that some African youth teams are often suspected of being full of overage players, with age scandals hitting the likes of Nigeria, Ghana and Kenya in the past.

Former Nigeria international Jonathan Akpoborie, 45, says age fraud is "rampant" in African football and describes it as the "biggest problem" the game faces there.

In April 2013, nine players were excluded from the African Under-17 Championship in Morocco after MRI wrist scans showed them to be over the age limit.

Congo-Brazzaville, Ivory Coast and Nigeria each had three players banned.

Later that year, Nigeria lost several key players for the Fifa Under-17 World Cup in October for the same reason, while Somalia were expelled from qualifying for the 2013 African Under-17 championship for fielding over-age players.

Akpoborie, who now works as an agent, admits he knows of many players who "lied" about their age in African football.

He told BBC Sport: "It has been a big problem and still is. Some of them played at the Under-17 level and then a few years later retire because they can't run any more.

"Look at Spain's national team as an example of how it should be done. The likes of Xavi and Andres Iniesta came through the youth teams. You can track their career all the way through.

"When you look at the African players playing for the Under-17s, maybe one or two years later they have retired because they can't produce what they produced at Under-17 level because they are so old. The wrong players are being given the platform."

Not that this a new problem. Fifa banned Nigeria from all international fixtures for two years after finding that the birth dates of three of their players in the 1988 Olympics were different from ones used by the same players in previous tournaments.

In 2003, Kenya's national Under-17 team was dissolved by the government after some players admitted to being over age.

Ben Koufie, a former President of the Ghana Football Association, told BBC World Service in 2012: "The problem has been bad for a long time but it is changing for the better.

"It is quite common, in certain cases, when you ask a player about his age, he will ask if you are asking about his football age or his actual age."

Is the problem unique to African football?

Three years after their success, it was revealed that defensive midfielder Carlos Alberto had given the wrong age.

Cases like this not unfamiliar in other South American countries.

Akpoborie said: "It isn't just in Africa, I am sure. You know there have been problems in South America but you also know the problem in Africa is really big.

"Maybe it is easy in Africa for players to get away with it - or it used to be. There are not many places in the world where it is so easy as it is in Africa. Efforts are being made to stop it."

In November 2012, Australia and Saudi Arabia lodged official complaints over suspicions that the Syrian Under-19 team, competing at the Asian Championships, included over-age players.

John Boultbee, the head of the Football Federation Australia's International Department, told BBC World Football back then that the problem was "endemic" and that more needed to be done.

He said: "A few days before the competition began, we were provided with the registration list and the Syrian team featured six players born on 1 January 1 1993 - the last day you could be born to be eligible. The whole team had January birth dates."

Why do players give false ages?

So what could the reasons be for players pretending to be younger than they are?

African football journalist Oluwashina Okeleji cites personal ambition, pressure for success and ease in falsifying your age as factors for it.

"It is very difficult for young players to go abroad and play and it can take so long that they are too old when they are noticed, so they have to reduce their age, maybe by 10 years," he said.

"Another factor is the pressure on the under-17 and under-20 sides for success. Some of these coaches are forced to bring in these players over age."

Junior Binyam, the Confederation for African Football's (Caf) media director, agrees age fraud is a problem in Africa because countries do not have a reliable database to track ages.

He said: "It is easy in many countries to change ages or 'amend' those registers. It is not rare to find people with more than one birth certificate.

"In some cases, when the player changes identity, he can, most of the time, be registered as a new player. The fraud on ages then affect the development programs if the players involved in an age category are not really from that category."

With a shortage of legal documents to clarify ages in Africa, Koufie believes confusion could be one reason for so-called age fraud.

When asked about Ghana's Under-17 World Cup win in 1991, he admitted some of the players did not know their real age.

He said: "In Africa, many people don't know when they were born. Sometimes they guess. It is true we have problems in Africa, that is why we have a doubt about it, whether it is genuine cheating or not."

What is being done to combat the issue?

The use of magnetic resonance imaging (MRI) was introduced by Fifa in 2009 for the Under-17 World Cup in Nigeria to help work out whether players were over age or not.

Dr Yacine Zerguini, member of the Fifa and Caf medical committees, said at the time: "We know that it is not generally bad intention or purpose if players are biologically above 17 years.

In some countries, birth certificates are inaccurate or even not available

"In some countries, birth certificates are inaccurate or even not available, without that necessarily being the fault of the player or the association."

MRI is used to scan the left wrist of players to accurately find their true age.

Binyam said the executive committee of Caf has instructed its medical committee to investigate extending its use to the Under-20 tournaments.

Okeleji said: "Right now, with the introduction of the MRI scan in Fifa and Africa, the problem has reduced. You look at the Cameroon boy and this case has been overblown. Lazio would not have signed him before using an MRI scan to determine his age."

Akpoborie, who enjoyed spells with Wolfsburg and Stuttgart in Germany, believes there is still a lot of room for improvement but that efforts are being made.

He says the introduction of MRI scanning had been a success and also praised efforts made by individual governments.

He added: "The government in Lagos, Nigeria, has put a new programme in place where every child who attends school is given a number and this number stays with them,

"Without that number you can't play in the junior leagues. Someone like me, who is an agent, can only take a player who has that number. I just hope the whole federation will adopt that system.

"It is a complex problem and without everyone uniting together against it we won't be able to get rid of it."