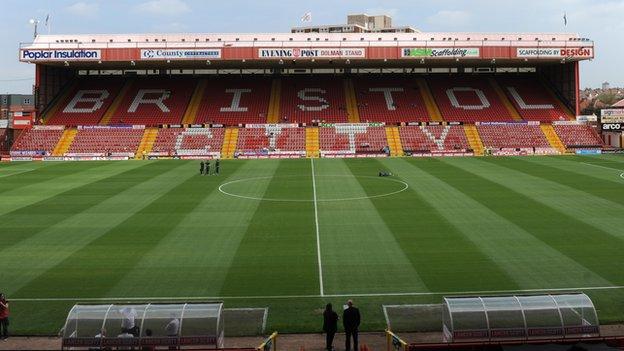 Bristol Rugby are in full support of Bristol City's plans to install rail seats at their new shared home.

The Championship club currently play at Bristol Rovers, but will move to Ashton Gate at the start of next season.

City's ground will be redeveloped this summer and it was announced on Wednesday that rail seats are set to be installed, which will provide rugby fans with a standing area.

What are rail seats?

"It's an important change for us," said rugby chief executive Steve Gorvett.

"The rugby supporters are used to being able to stand, and if that's possible down here at Ashton Gate then that would be fantastic.

"We are very supportive of everything Bristol City are hoping to do. We'll just have to see how it evolves over the coming months."

Regulations currently prohibit use of rail seating in football but the Football League has agreed to lobby the Government in a bid to permit "safe standing" areas in the game.

All-seater stadiums have been compulsory in the top two tiers of English football since an inquiry into the 1989 Hillsborough disaster, which claimed the lives of 96 Liverpool fans.

Standing is currently allowed in Leagues One and Two - where Bristol Rovers play - but Championship grounds must be all-seater after a club have played in the second tier for three seasons.

Bristol City have installed a demonstration block of rails seats at Ashton Gate.

It is in an area of the ground not currently used, but will give fans an idea of what the proposed new areas would look like.

Bristol Rugby's move to Ashton Gate came about after City's owner Stephen Lansdown took over the rugby club - who are looking for promotion back to the Premiership.

Gorvett told BBC Radio Bristol that the introduction of standing for rugby fans at the club's new home will ease the transition.

"It will certainly be easier for everyone. People are now looking forward to being down here," he added.

"The supporters are keen to continue standing, so it's important to them.

"It will certainly be easier for everyone. People are now looking forward to being down here.

"We need to be in the Premiership to fill it, but when you look at the Gloucester, Worcester and Bath local derbys, we can definitely fill it for those games.

"I think in a few years we'll do well from this."