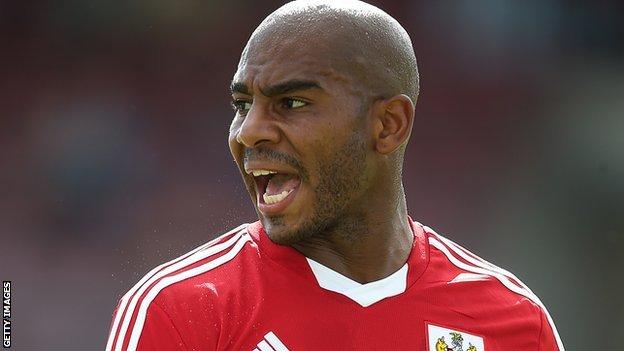 Bristol City midfielder Marvin Elliott is set to miss the rest of the season after fracturing his ankle.

The Jamaica international, 29, also broke his hand and bruised his head in a freak clash with Oldham's James Wesolowski during Saturday's 1-1 draw.

"It looks like we won't have him for the rest of the season," boss Steve Cotterill told BBC Radio Bristol.

"I feel sorry for him, he's a good boy. He can't even use crutches because of his hand."

Cotterill added: "It's a blow for me and the dressing room but, more importantly, it's a blow for the boy because I think he was enjoying himself."

Elliott has been at Ashton Gate for seven years but is out of contract in the summer.

He has made 30 appearances this season and, two games prior to his injury, he scored twice to earn his side a 2-1 victory against fellow League One strugglers Carlisle.