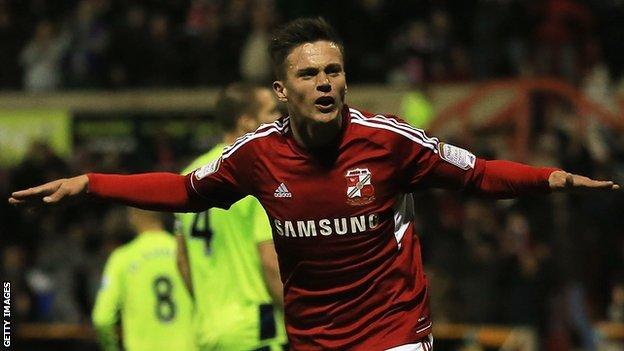 The 20-year-old Midlander, who was on the books of both Wolves and Coventry City as a schoolboy, briefly became the relegation-threatened League One club's seventh current loan player.

Only five of them can be included in the matchday squad at any one time.

But Town have counterbalanced this by releasing one of their previous loan signings, winger Sidney Schmeltz.

The Dutchman, who made four appearances (two of them from the bench) in his month with Shrewsbury, has also had his contract cancelled by parent club Oldham Athletic.

With Storey now expected to make his debut in Saturday's home derby with Port Vale, that still means one of Town's other five loan players being left out.

West Bromwich-born former England Under-19 international Storey, who came through Swindon's academy, made his senior debut in September 2011.

He has scored three goals in a total of 21 appearances for the club, including two within six minutes of coming on as a substitute, to bring his team back from two goals down in last season's eventual 3-2 Capital One Cup fourth-round defeat by Aston Villa.

But he missed a penalty in the shoot-out in last term's League One play-off semi-final defeat by Brentford.

Storey will now be competing for a place with fellow on-loan strikers Tom Eaves (Bolton Wanderers) and Bahrudin Atajic (Celtic).

Of their six remaining loan players, five have now been brought in by caretaker boss Mike Jackson, who has two more matches to make his case for keeping the job on a more permanent basis.

I want to stay here. I know what's needed at this club

Jackson, initially given three matches following the departure of Graham Turner, then had his trial period extended until the end of February.

But, following this Saturday's lunchtime derby date with Micky Adams' Port Vale (15 February, 13:00 GMT), his time is up after next Saturday's trip to Notts County.

Jackson, part of Town's backroom team since being appointed by Turner in 2010, insists that he would like to remain at the Meadow, whether or not he gets the manager's job.

"I know it inside out, and I know what's needed to take it forward. But it's a long-term project.

"Whoever gets the job will be revealed in the next couple of weeks, and that's going to be determined by results and performances."